Walmart and Amazon have been competing hard recently, and just like last year, this summer...

The post Walmart Just Cut This Annual Event Despite Amazon's Success appeared first on Eat This Not That.

Walmart and Amazon have been competing hard recently, and just like last year, this summer rumors have been swirling about the upcoming Prime Day sales event. Rather than show up to the fight, however, Walmart has decided to bypass just one sale and opt for something bigger.

This year’s Amazon Prime Day is taking place July 12 and 13. The event is usually a huge money maker for the online company and Walmart typically hosts its own event that day to get in on the profits—last year’s Prime Day event in October had Amazon generating about $10.4 billion in sales, according to Fortune.

RELATED: This Costco Rival Is Expanding From Coast to Coast

Walmart company leaders have decided that its prices are already low enough right now, according to CNBC. Currently, it’s been running weeks-long discounts on items, particularly on appeal, electronics, outdoor, and some household items. 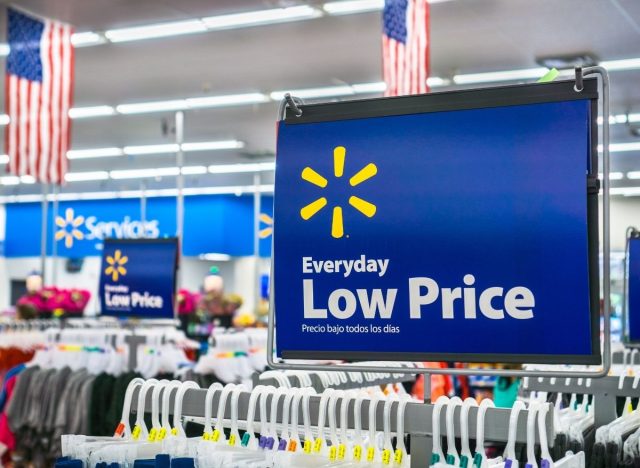 The heavy discounting has been a result of a recent inventory surplus that has plagued both the big blue box store and Target following a consumer cutback on post-pandemic spending. Looking to downsize, it has started adding more items to the clearance rack to make way for essential categories, like groceries, in its warehouses.

Walmart shared its plans to start discounting its excessive loads of inventory in an earnings call right before the summer holiday on May 17, where Executive Vice President and Chief Financial Officer Brett Biggs stated that the company is currently in a “short period of rightsizing” the surplus and would be focusing on maintaining its image of value for customers as a result.

So, to Walmart’s benefit, for the past few weeks, every day has looked like Prime Day—showing it is extra serious about its “Everyday Low Prices,” slogan this year.

Walmart has been busy with other projects, too, particularly its massive makeover which has had it remodeling stores around the U.S. Its plans to invest almost $55 million starts with 12 stores in Virginia this year.

The post Walmart Just Cut This Annual Event Despite Amazon's Success appeared first on Eat This Not That.