Ah, marijuana. Some call it pot, grass, and ganja. But it's simply made up of...

The post Vaping Versus Smoking Marijuana: Which Is Better for Your Body? appeared first on Eat This Not That.

Ah, marijuana. Some call it pot, grass, and ganja. But it’s simply made up of the flowers, leaves, seeds, and stems of a cannabis plant. The adult medicinal and recreational use of marijuana is becoming legal in more and more states. Be sure to check the laws in your state before indulging. Although it can cause headaches, sleepiness, lightheadedness, and dry mouth, it has positive side effects, too. It can help you deal with nausea and vomiting from chemotherapy, muscle spasms, sleep issues, stiff muscles, and more. While some individuals choose to smoke it, others vape marijuana. You may be wondering about vaping versus smoking marijuana, and we have the answers.

Vaping is when you heat dried parts of cannabis in an oil or liquid, then inhale the aerosol that’s created. It’s important not to burn it in the process. In order to smoke it, you essentially burn the dried cannabis plant and inhale the smoke from the burn.

Read on to learn more about vaping versus smoking marijuana, and which one is ultimately better for your body. And next up, don’t miss The 6 Best Exercises for Strong and Toned Arms in 2022, Trainer Says. 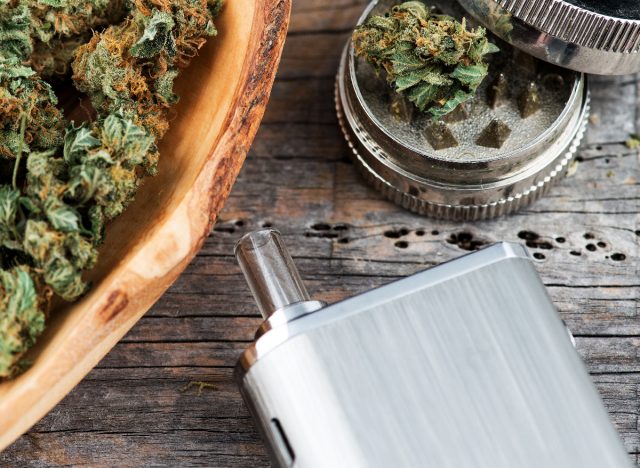 We spoke with Dr. Mike Bohl, the Director of Medical Content & Education at Ro and a member of the Eat This, Not That! Medical Expert Board regarding what medically happens to your body with both methods. “An aerosol is a suspension of fine particles in air, while smoke is a type of aerosol that is formed by combustion and contains particles that have undergone chemical change—notably, carbon-based particles,” Dr. Bohl tells us.

He explains that there still isn’t a lot of research to consider when it comes to vaping marijuana and your body. Dr. Bohl says, “We do know that inhaling cigarette smoke exposes the airways to tar and other dangerous chemicals and increases the risk of lung cancer. However, while smoking marijuana can cause respiratory symptoms (e.g., coughing), it’s unclear if it is linked to respiratory disease.” He adds, “It’s possible that the presence of cannabinoids (anti-inflammatory molecules in marijuana) may offset the effects of marijuana smoke. Vaping marijuana, on the other hand, is associated with a condition called EVALI (e-cigarette or vaping product use associated lung injury).”

EVALI, which Dr. Bohl says was identified in 2019, causes negative symptoms such as chest pain, coughing, shortness of breath, and gastrointestinal issues. EVALI can possibly develop into respiratory failure. “Samples taken from people with EVALI have shown that the majority (but not all) used products containing THC, the molecule in marijuana that gets a user ‘high.’ The exact link between THC and EVALI is unknown, though, because EVALI is also possible in people who have not used THC-containing products. Instead, the culprit in some cases may be a different molecule called vitamin E acetate,” Dr. Bohl explains.

When it comes to cigarettes, vaping is typically considered a safer choice when compared to smoking, Dr. Bohl notes, but the healthier option is not clear when discussing marijuana.

Related: The Incredible Side Effects of Taking CBD With Melatonin 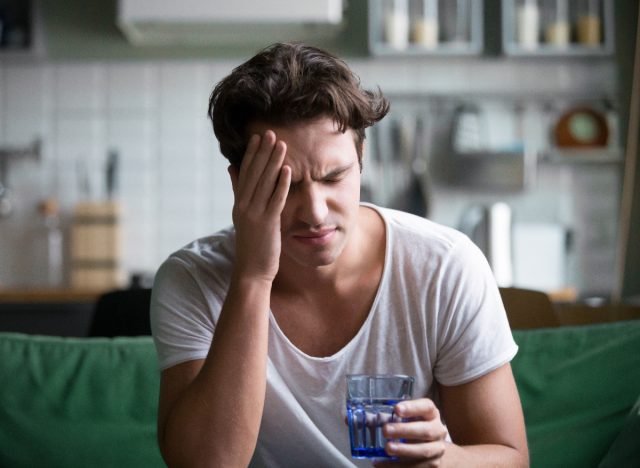 There are negative side effects that occur when vaping marijuana. Depending on the strain, these include feeling intoxicated, varying degrees of energy, mood changes, paranoia, lethargy, hunger, cottonmouth, headache, irritated throat, red eyes, coughing, and respiratory problems. There are also potentially long-term mental health issues with excessive use of marijuana. 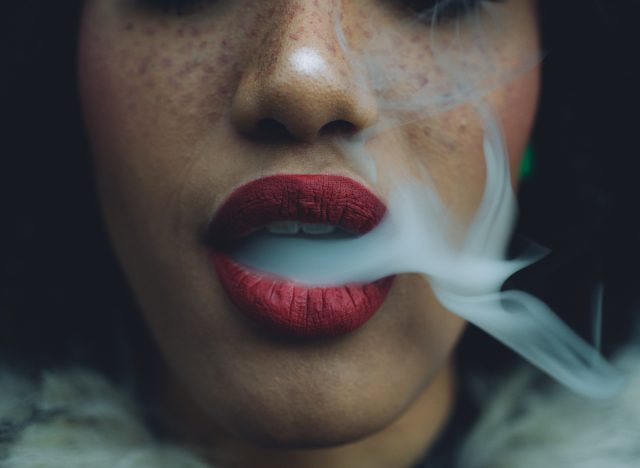 The benefits of vaping marijuana, when compared to smoking it, include better taste, increased convenience, lack of smell, and fewer respiratory symptoms (such as coughing). “The benefits of using cannabis include anti-inflammatory effects and reduced stress, pain, muscle tension, and nausea,” Dr. Bohl explains.

There are many styles of vaporizers to suit your personal preference 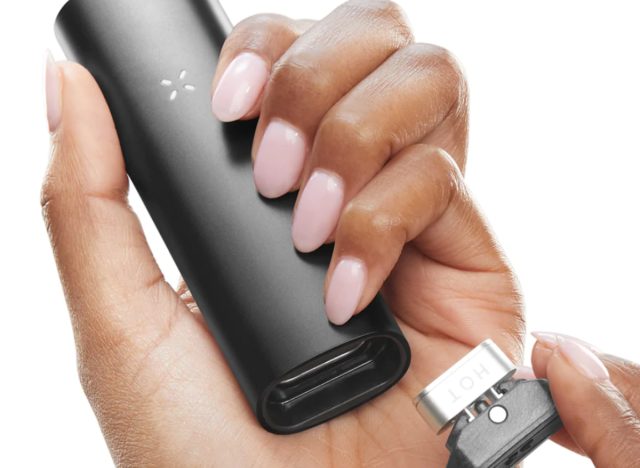 If you do decide to vape, Dr. Bohl tells us there are many styles of vaporizers to suit your individual preference and use. There are small battery-powered vape pens that can be quite convenient and discreet to take anywhere. You can also choose a plug-in desktop vaporizer, which is larger but possibly more efficient. It’s important to decide the form of cannabis you will use, as some vaporizers are designed to heat cartridges of oil or liquid, while others heat up parts of the actual cannabis plant.

In addition, you can choose the heating method you prefer. Some vaporizers are faster and can be used in smaller devices because they use conduction. Others are convection, which heats the cannabis more evenly. This model may be considered more efficient and even gentler on the lungs, Dr. Bohl explains. You can also get one with a temperature control function, which can impact your vaping experience as well as the cannabinoid compounds released from the plant.

Dr. Bohl advises, “If you vape cannabis, make sure you are purchasing everything (including the cannabis) from a reputable source. The majority (but not all) of those with EVALI got their products from illicit sources or friends and family.”

Do your research, and figure out what best suits your needs. Roundups like the “Best Weed Vapes for Dry Herb and Concentrates” by Gear Patrol can be really helpful along the way. Something like the PAX 3, for example, which was voted “Best Overall Weed Vape” by Gear Patrol features an enhanced oven with four temp modes that heats up in just 20 seconds. PAX 3 has eight to 10 sessions (2.5 hours) of battery life in it, and you can enjoy it with both flower and waxy/solid concentrates. Plus, you can connect your vape with the PAX app to take your sessions to the next level.

Opt for a Basic Kit or the Complete Kit, which hooks you up with the Concentrate Insert, a Half-Pack Oven Lid, and the brand’s top-selling Multi-Tool. According to PAX, “Our patented temperature control brings out the best in your flower and concentrate. You get consistent flavors, aromas, and potency. All without the harmful byproducts of combustion.”

The post Vaping Versus Smoking Marijuana: Which Is Better for Your Body? appeared first on Eat This Not That.

August 7, 2022
Add This to Your Water If You’re Trying to Lose Weight