MANILA, Philippines – Save the judgment after the FIBA World Cup.

Gilas Pilipinas head coach Chot Reyes says the World Cup next year remains the top priority even as fans continue to call for his head.

The clamor for Reyes’ resignation only got louder after the Philippines opened its FIBA Asia Cup campaign with a 15-point loss to Lebanon, a team with a lower world ranking.

“I’m just keeping myself focused on the big picture and the big picture is to make sure that we put together the best team for the world championships in 2023,” Reyes said after their 101-59 win over India on Friday, July 15.

“Everything we’re doing now is preparation and buildup for 2023. That is where people can judge, how well that team plays. By that time, I am sure we would have put together our best team.”

Reyes has been the subject of scrutiny ever since he took over the coaching reins for the national team in February after former head coach Tab Baldwin stepped down.

The flak he received reached a fever pitch when Gilas Pilipinas fell short of a 14th straight gold medal in the Southeast Asian Games in Vietnam in May following a stunning loss to Indonesia.

But for Reyes, these misfortunes – as painful as they may be – will help Gilas Pilipinas be better.

“I took responsibility and accountability for that, I did not blame anyone or anything. All of those things are all part of the process,” Reyes said of the SEA Games mishap.

“These losses, the difficulties, the adversity. I always tell the players to just keep focused on the big picture. If we can consistently overcome these adversities, it will just make us stronger for 2023.”

As fans chide Reyes for staying on the job, he reiterated that he did not volunteer for the post.

“I was happily retired and doing my work, enjoying my life, coaching my professional team. But my predecessor stepped down. Somebody has to do the job,” said Reyes.

“It took a long time for me to accept it because I knew how difficult the job.”

Reyes added he has no ulterior motive when he took the offer to return as Gilas Pilipinas’ tactician. 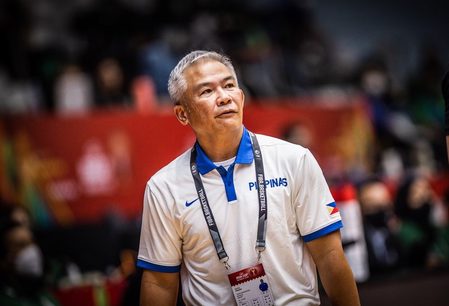