If you have a cookout coming up, you may want to check on the items...

The post This Regional Grocery Chain Is No Longer Selling All Varieties of This Deli Item appeared first on Eat This Not That.

If you have a cookout coming up, you may want to check on the items that will be offered. A favorite American summertime side dish sold at every grocery store around the country is being pulled from shelves at one chain because it might contain a potentially dangerous bacteria.

Hy-Vee has issued a recall of its potato salad “out of an abundance of caution” after a “presumptive positive microbial result” was tested from one of the production lines where the potatoes were processed on. The result means that listeria has been detected, although it’s not clear whether the bacteria sample found is living or dead.

RELATED: 4 Yogurt Brands To Stay Away From Right Now 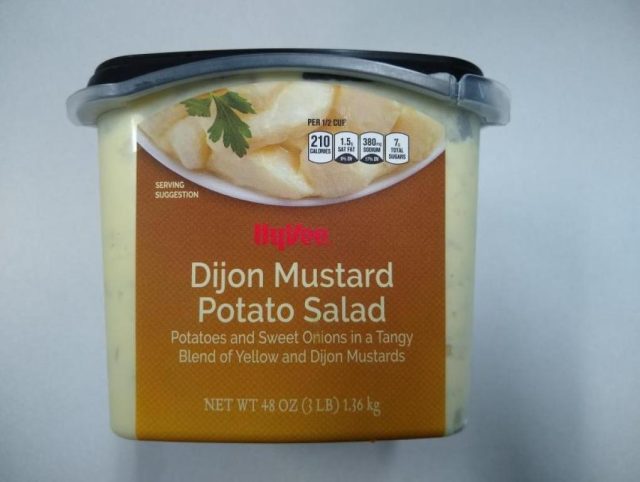 All Hy-Vee stores involved in the recall in Illinois, Iowa, Kansas, Minnesota, Missouri, Nebraska, South Dakota, and Wisconsin including the Hy-Vee Drugstore, Dollar Fresh Markets, and the Hy-Vee Fast and Fresh convenience stores have removed the products. If you are concerned you may have one or more in your fridge, you can look for the expiration dates, which are between July 31, 2022, and Aug. 4, 2022. There have been no reports of any illnesses or complaints as of July 12.

Listeria is particularly harmful to those with weakened immune systems or elderly individuals. However, it can be especially concerning if you’re pregnant, as the bacteria has been known to produce severe outcomes for unborn babies who are infected, which includes the risk of stillbirth, according to the Mayo Clinic.

Symptoms of listeria include gastrointestinal issues like fever, vomiting, diarrhea, and abdominal pain. If you think you may have consumed food containing the listeria bacteria, it’s important to contact a doctor right away.

While potato salad may be a favorite go-to summer side, keep an eye out for ice cream as well—another season staple causing illnesses. According to a recent Food Safety Alert issued by the CDC, a second listeria outbreak has been linked to the Big Olaf Creamery in Florida, resulting in multiple sicknesses and even one death.

The post This Regional Grocery Chain Is No Longer Selling All Varieties of This Deli Item appeared first on Eat This Not That.