In the shocking food poisoning outbreak that has been linked to a popular meal delivery...

The post This Recalled Snack Has Caused Jaundice, Stomach Pains, and More in Almost 500 People in 34 States appeared first on Eat This Not That.

In the shocking food poisoning outbreak that has been linked to a popular meal delivery service, reports of illnesses have more than doubled since the Food and Drug Administration’s initial report on June 30.

Meal subscription company Daily Harvest recalled its Lentil & Leek Crumbles product on June 23, as multiple customers began reporting health issues after having consumed it. In some cases, the food poisoning was extreme enough to cause liver damage and necessitate gallbladder removal and, in one particularly bad case, a liver transplant.

RELATED: 8 Dine-In Restaurant Chains That Use the Highest Quality Ingredients

As of July 14, the FDA has received 277 reports of illnesses and Daily Harvest has received more than 470 reports. Nearly 100 customers required hospitalization. While the product is no longer being sold, from April 28 to June 17, almost 30,000 packages were mailed to customers in 34 states. Additionally, the product was sold online as well as at the company’s Chicago and Los Angeles stores.

So far, customers have reported a wide range of symptoms including gastrointestinal issues like stomach pain, vomiting, nausea, and diarrhea, as well as intense body aches and chills. Others have reported symptoms indicative of liver dysfunction, including dark urine, jaundice, fatigue, fever, and itching. 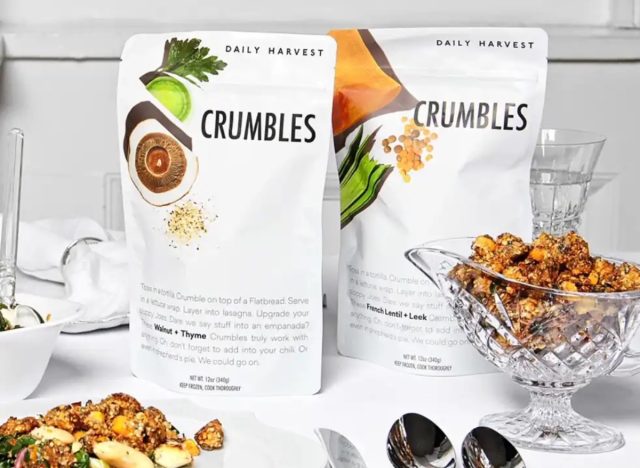 Daily Harvest has not announced any findings on the outbreak and medical professionals remain stumped as to the cause.

“The symptoms for this are just not typical of what we would see with your traditional type of hazards in food,” said Martin Bucknavage, a senior food safety extension associate at Penn State University in an interview with NBC. “It’s different, and it’s not something I’ve ever seen.”

The company released a statement on July 12 that it has been working with the FDA and other experts but tests on the lentil snack for every common food pathogen have “come back negative.” That includes tests for “Listeria, E.Coli, Salmonella, Staphylococcus Aureus (Staph), B.Cereus, and Clostridium Species.”

In late June, a plaintiff in Tulsa, Okla. filed a lawsuit against Daily Harvest, claiming she was hospitalized on May 9 because of nausea, headache, abdominal pain, and gastrointestinal discomfort as well as pain in her right shoulder after consuming the product. After four days of treatment, her gallbladder was removed.

Daily Harvest claims it alerted customers when the recall was made and gave them a $10 credit for the product. However, if the crumbles are still in your freezer, you are urged to throw them away immediately.

To boot, the brand has come under fire for its response to the issue, which has been deemed not reflective of the gravity of the situation. Customers took to social media to share their experiences with the case, which included mentions of a wide range of jarring symptoms.

According to Daily Harvest, I experienced "gastrointestinal discomfort".

One Reddit user wrote their wife was hospitalized after exhibiting symptoms of “severe liver problems,” which included, “extreme fatigue, dark urine, fever, and whole-body itching with no rash.”

The Reddit thread has received numerous comments from customers reporting similar symptoms, and the original poster noted a class action lawsuit was in the works.

The post This Recalled Snack Has Caused Jaundice, Stomach Pains, and More in Almost 500 People in 34 States appeared first on Eat This Not That.