While it has long been advertised that eating Skittles allows consumers to "taste the rainbow,"...

The post This Popular Candy Still Has a Toxic Chemical And Here's Why It Might Be Dangerous appeared first on Eat This Not That.

While it has long been advertised that eating Skittles allows consumers to “taste the rainbow,” each bite could contain potentially toxic nanoparticles, according to a recent class action lawsuit.

It was filed in mid-July in California and claims the Mars Corporation knowingly includes high levels of the chemical titanium dioxide in the ingredients—which is used to give the candy its color—but is being banned in Europe for being a carcinogen in August.

It also says the company has failed to adequately warn customers about its dangers and thus the chemical makes Skittles “unsafe for human consumption.” The suit says not warning customers about this ingredient is a “fraud of omission” which makes Mars guilty of multiple “violations of California law,” according to the Washington Post.

In 2016, Mars said it would stop using titanium dioxide in all its candies within five years. Yet, the lawsuit argues that has not happened into 2022, noting that other colorful sweets like Nerds, Sour Patch Kids, and Sweedish Fish don’t use it. 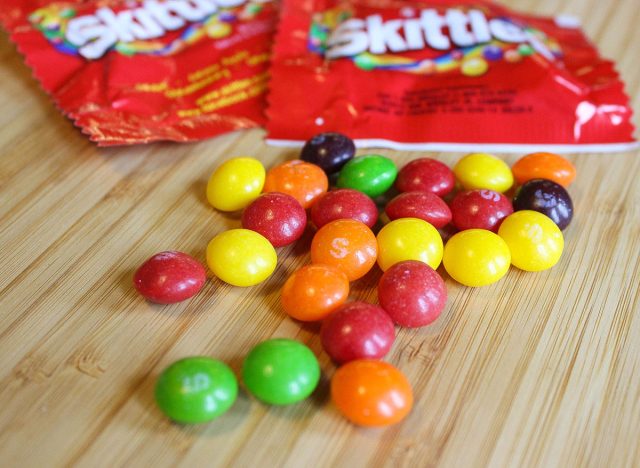 In response to the lawsuit, Mars says the levels it uses in Skittles are FDA-approved and are nowhere near enough to cause harm.

The food additive is mostly found in candies but is used in some makeup or medicine products. It is tasteless, colorless, and odorless. Its main function is to make colorful food more visually appealing, according to the European Food Safety Authority. However, in high concentrations, the white, powdery substance is suspected to cause cancer, particularly in the lungs.

Another grocery food staple called out for its toxic ingredients is Kraft Macaroni & Cheese, which allegedly contains chemicals that have been connected with allergies, asthma, obesity, and hormone interference in children. The major blue box brand received a lawsuit last year regarding phthalates it has had in its product since 2017.

Outside of the candy world, there are far more dangerous foods hurting consumers right now. Recently, a recalled snack from the delivery service Daily Heavest may have caused an outbreak of severe illnesses in almost 500 people, including jaundice, stomach pains, and more in 34 states.

The post This Popular Candy Still Has a Toxic Chemical And Here's Why It Might Be Dangerous appeared first on Eat This Not That.