Thirty years ago, malls were the epicenter of American life, a place where everything and...

The post This Iconic Food Court Chain Is Undergoing a Significant Makeover and Opening New Locations appeared first on Eat This Not That.

Thirty years ago, malls were the epicenter of American life, a place where everything and everyone could be found. These days, the once-omnipresent mall is almost a relic, having lost much of its pedestrian traffic and allure as a teenage hangout harbor. And one food court brand wants to break out of those confines before the ship sinks completely.

Auntie Annie’s, the iconic little pretzel shop, has embarked on a huge brand transformation, introducing drive-thrus to its service model. Having been known as an impulse draw for hungry shoppers looking to grab a bite between stores, Annie’s is aiming to reinvent itself as a snack destination.

RELATED: 4 Once-Largest Restaurant Chains In America That Went Out of Business

The 1,200-location brand opened its first drive-thru location in Wylie, Texas last year, which is co-branded with its sister company, Jamba Juice. It has since opened two more locations in El Paso, Texas, and Nampa, Idaho, and an Atlanta, Ga., location is set to debut later this year. Altogether, the once mall-bound chain now has plans for 12 new drive-thru locations by the end of 2022, according to Restaurant Dive. 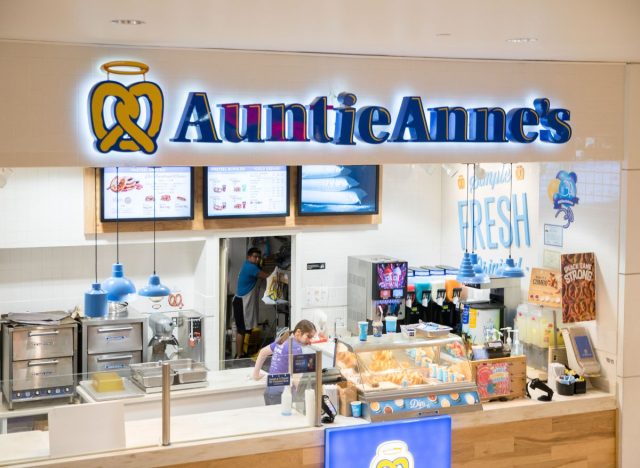 The brand has also improved its digital presence, honing its app and loyalty program, which now includes about two million members. It also begun offering the ability to order ahead and is working on including a separate area for mobile pickup customers at its locations. 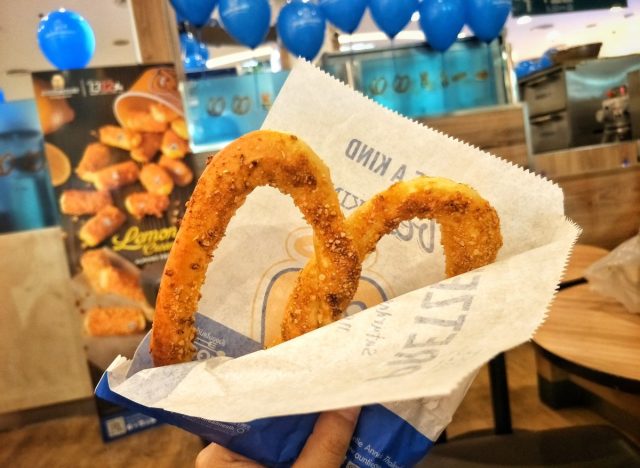 Just four years ago, the brand could still be found in over half the malls in America, according to Restaurant Business. But with the new drive-thru locations, Auntie Annie’s is seeing a transformation in the behavior of its customers who are transitioning from malls and airports, the types of places that were originally its bread and butter.

These days, its new drive-thru stores welcome a different crowd than the famished mall shoppers that used to frequent it. Now the chain caters to more late-night snackers, which is something that wasn’t possible during regular mall hours. Even though it’s open during the day, most of the shop’s traffic comes during the afternoon and the late evening.

Auntie Annie’s doesn’t plan on saying goodbye to the mall, however. It knows its customer base still loves having it there and has recently made a viral Tik Tok proclaiming, “We will always be in the malls, but we’re opening drive-thrus.”

The post This Iconic Food Court Chain Is Undergoing a Significant Makeover and Opening New Locations appeared first on Eat This Not That.