One more grocery store staple is joining the long list of items that are in...

The post This Grocery Store Pantry Staple Is Facing A Low Supply appeared first on Eat This Not That.

One more grocery store staple is joining the long list of items that are in short supply these days.

Chickpeas, the main ingredient in hummus, are facing a shortage on a global scale, according to Reuters. The supply could see as much as a 20% reduction in its availability soon, which has mainly been a result of poor weather conditions and war.

RELATED: Walmart Is Pulling 13 Baked Goods From Its Shelves in All 50 States

While the plant protein is famously eaten in India and the Middle East, the United States is actually the fourth largest exporter of the world’s supply. While that fact should ring as a positive for keeping grocery store shelves stocked, the U.S has been hindered by dry weather and subsequently pivoted to planting more lucrative and less demanding crops.

Combined with shortages from previous seasons, the U.S is currently looking at a little over 10% less crop as of June 1 than the year before. Additionally, what chickpea dwindling supplies we do have, buyers from other countries are trying to stockpile for themselves, the news agency says. 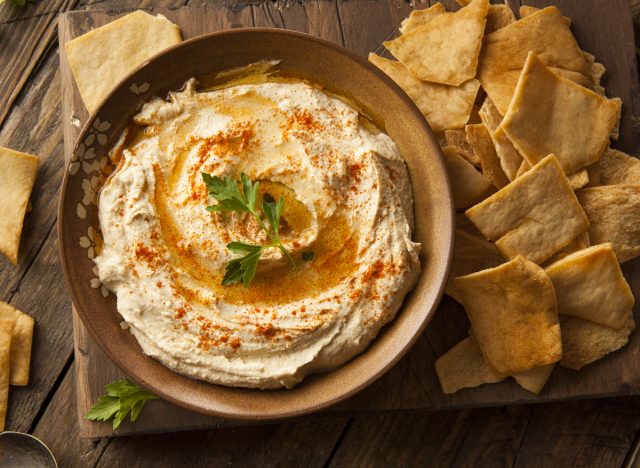 In conjunction with the weather, the Ukraine/Russia conflict has accounted for many issues in the global supply chain, including for chickpeas. Due to the war, Ukraine was unable to plant its crops and subsequently took 50,000 tons out of the global picture during a time when supplies were already weakened. And on top of that, take an additional 25% from Russia out of the chickpea trade as well—the crop isn’t having a flourishing year.

Some groceries are already seeing shortages on shelves. Kiwis have been affected by bad weather leading to fewer fruits and Sriracha has got hot sauce fans heated about not having the condiment readily available. For drinkers, both coffee and wine are seeing shortages—the former from dwindling land and poor weather and the second from a lack of available bottles.

The post This Grocery Store Pantry Staple Is Facing A Low Supply appeared first on Eat This Not That.