There's a lot of debate over which meal is actually the most important—in the United...

The post The #1 Best Eating Habit for a Flat Belly, Says Dietitian appeared first on Eat This Not That.

There’s a lot of debate over which meal is actually the most important—in the United States it’s typically thought of as breakfast, but in different countries throughout the world, emphasis is placed on lunch and dinner as well.

But according to Meghan Stoops, RD at Naked Nutrition, none of that should matter. Instead of eating the traditional three large meals, the best eating habit to aid having and maintaining a flat belly is eating between five and six smaller meals throughout the day.

“It helps to keep your metabolism running optimally and avoid over-eating throughout the day,” Stoops says. “In other words, it’s a simple way to cut down on your overall intake while still feeling satisfied.”

Read on, and for healthy eating tips check out 4 Ways to Dine Out and Still Lose Weight. 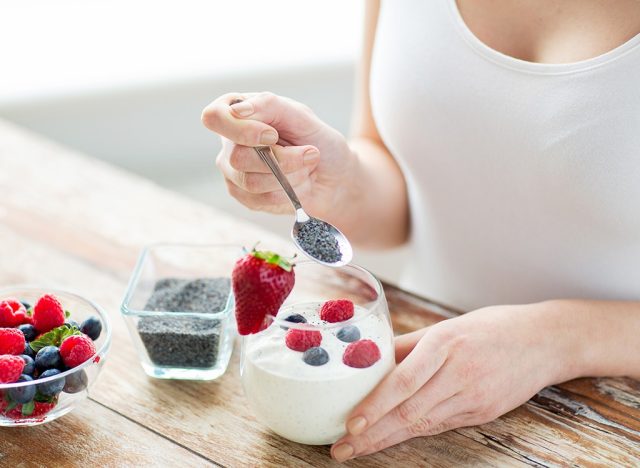 This may be a difficult change to make for people who are more accustomed to eating three larger meals throughout the day. To help ease the transition, Stoops recommends continuing to eat breakfast, lunch and dinner, but have them be smaller meals, and include two snacks between the meals during the day.

She also says that it’s important to include good protein sources, as well as sources of fiber, in each of the meals to help maintain a feeling of fullness. In addition to the benefits of eating more frequent, smaller meals, including regular sources of high-protein foods in your diet will also help contribute to a flat belly, according to a 2018 study from the U.K. The study says that a high-protein diet can be an “effective weight loss strategy” because it reduces hunger and increases energy expenditure.

One of the things that can keep a belly from appearing flatter is bloating, and Stoops adds that eating smaller meals at a more frequent rate can help to avoid bloating because it avoids the heavy digestion that bodies undergo after consuming a large meal.

“If you are prone to bloating, choosing small, frequent meals can help to avoid the heavy load of digestion often caused by a large meal, thus eliminating the discomfort of bloating and gas,” Stoops says. “It’s a lot gentler on the stomach.”

In addition to helping to alleviate bloating, being gentler on the stomach according to Stoops, and aiding in the effort to have and maintain a flat belly, eating several smaller meals throughout the day has also been associated with improving heart health, says a 2019 study.

The study concludes that eating more than four meals a day can result in improved cholesterol levels, which ultimately leads to improved heart health and a lower chance at developing cardiovascular diseases.

So, if you’re interested in trying this method of eating, grab some of your favorite snacks to have on hand in between meals and give it a try!

The post The #1 Best Eating Habit for a Flat Belly, Says Dietitian appeared first on Eat This Not That.