Thai BL stars Tay Tawan and New Thitipoom (TayNew) are in the Philippines for the 'Beyond Limitless' fan-meet on Saturday, July 30 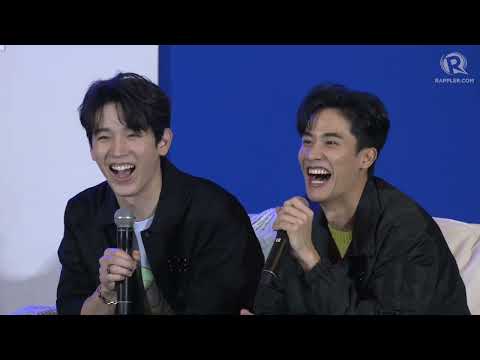 MANILA, Philippines – Thai BL (Boys’ Love) stars Tay Tawan Vihokratana and New Thitipoom, famously known together as “TayNew,” said they would like to visit Boracay, the Chocolate Hills in Bohol, and the famous Banaue Rice Terraces in Ifugao if given the chance to tour around the Philippines.

“There are a lot of places I wanna go to in the Philippines,” Tay said in a press conference on Friday, July 29, although he admitted that both him and New are “very busy” to travel.

TayNew played the characters Pete and Kao in the GMMTV-produced Thai BL series “Dark Blue Kiss,” “Kiss Me Again,” and also appeared in a special episode of “Our Skyy.”

More than a hundred Polcas or TayNew fans who paid for an SVIP ticket for the July 30 fan-meet also attended the press conference and got the chance to have their photos taken with the artists.

The press conference came a day before TayNew’s ‘Beyond Limitless’ fan-meet at Solaire, Parañaque City.

The BL tandem was also asked about the Filipino food that they would like to try.

New said he would like to try the Filipino dish kare-kare and the dessert halo-halo, while Tay said he wants to try the world-famous adobo.

Asked about their impressions of the Philippines, both actors agreed that Manila and Bangkok give off the same vibe because of the weather and the traffic, adding that they feel very comfortable being in the country. 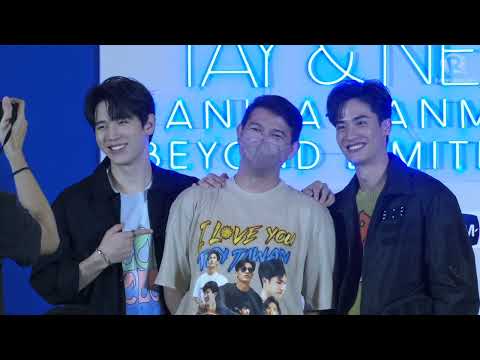 Caitlin Laban, a Polca or TayNew fan, couldn’t contain her joy when interviewed by Rappler after the press conference.

“Everything is so worth it, and I just realized how much I love them – like so much more now that I saw them in the flesh, like posible bang magmahal ng gan’on (is it possible to love someone this much)?” Bercero added.

“Surreal” is also how Marie Monique Macatuggal described the feeling after meeting TayNew.

(I never actually imagined that I would meet them because I became a fan only in late 2021, and now I have met them. If I fell in love with them before, my love for them was even cemented more. I really love them.)

Both Tay and New thanked their Filipino fans after the press conference.

“Thank you everyone for coming today and I hope that you enjoyed [this day] with us. Thank you for coming. We are very happy,” New said to their Filipino fans.

“We love you so much and if we have time we will come back again and again. We love you, Philippines!,” Tay said.

This is the second time that TayNew are in the Philippines for a fan-meet. In 2018, the BL stars also held a fan-meet in Makati City, together with Thai actor Earth Pirapat. – Rappler.com