Currently, Saudi Arabia accepts Muslim pilgrims arriving from Israel to Mecca but requires them to travel through a third country, a costly diversion

The announcement is expected to come during US President Joe Biden’s visit to Saudi Arabia later this week, the official said. Biden has made it a focus to integrate Israel into the broader Gulf region, particularly with Saudi Arabia.

Saudi Arabia did begin allowing Israeli airlines to fly over its territory in a special air corridor for flights to and from the United Arab Emirates and Bahrain, after the signing of the Abraham Accords that normalized diplomatic relations between Israel and those two nations.

But Israel has yet to receive such access for flights to and from Asia, including China and India. 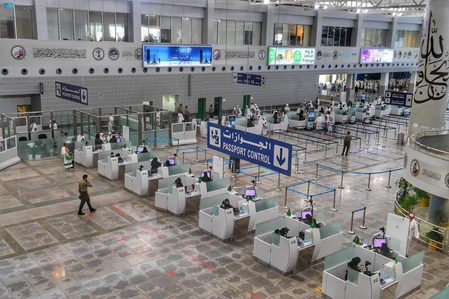 Israeli Prime Minister Yair Lapid was asked on Thursday at a joint news conference with Biden whether Saudi Arabia would approve the use of the air space, he said that it was Biden’s announcement to make.

The Saudi government did not respond to requests for comment.

Uri Sirkis, CEO of Israir, told Tel Aviv radio station 103FM on the prospective expansion of the Saudi corridor: “The eastbound route will be shortened by two hours on average. It will be a new era that will bring Asia closer to Israel.”

Saudi Arabia is expected to grant the request, the US official said.

The hajj is a once-a-lifetime duty for all Muslims physically and financially able to make the journey, which takes them along a path that the Prophet Muhammad is believed to have traversed some 1,400 years ago.

Currently, Saudi Arabia accepts Muslim pilgrims arriving from Israel to Mecca but requires them to travel through a third country, a costly diversion.

Bruce Riedel, a foreign policy fellow at the Brookings Institution, said the move represents an incremental improvement but said it could be used as leverage down the road.

“Granting overflights is a small gesture that gives the Saudis leverage. In a future Israeli-Palestinian crisis, which is only a matter of time, they can withdraw permission to show disapproval of Israel. They can do the same with Hajj flights,” Riedel said. – Rappler.com