The Pope issued a historic apology, calling the Church's role in schools and the forced cultural assimilation they attempted a 'deplorable evil' and 'disastrous error'

EDMONTON, Alberta – Pope Francis celebrates a stadium Mass on Tuesday, July 26, his first big open-air event on a trip to Canada centered around apologizing for the Catholic Church’s role in residential schools that tried to erase native cultures.

The Mass at Edmonton’s Commonwealth Stadium takes place on the day the Roman Catholic Church marks the feast of the grandparents of Jesus.

Francis is expected to repeat his frequent appeals to younger generations to cherish their elders and learn from them, a custom still revered in indigenous communities but waning in many Western societies. As the crowd was awaiting the Pope’s arrival, that theme was reflected in a talk by Phil Fontaine, a former Assembly of First Nations National Chief and a residential school survivor.

“It’s every bit about them as it is about us,” Fontaine told the crowd, referring to the respect indigenous people have for their elders.

Fontaine, who was among the indigenous leaders who met the Pope at the Vatican earlier this year and invited him to come to Canada, reflected on Francis’ visit on Monday to Maskwacis, which was formerly home to two residential schools.

There, the Pope issued a historic apology, calling the Church’s role in schools and the forced cultural assimilation they attempted a “deplorable evil” and “disastrous error”.

“I want to say to you my friends that what we really are talking about is forgiveness. We will never reach reconciliation without forgiveness,” Fontaine said.

“We will never forget but we must forgive. We invite the Catholic Church to rebuild the fractured relationship it had with us, for us and for all Canadians.”

In the afternoon, Francis, who is using a wheelchair and a cane because of a knee ailment, is due to visit Lac Ste. Anne, a pilgrimage site about 70 km (44 miles) west of Edmonton popular with both indigenous Canadian Catholics and those of European origin.

More than 150,000 indigenous children were separated from their families and brought to residential schools. Many were starved, beaten for speaking their native languages and sexually abused in a system that Canada’s Truth and Reconciliation Commission called “cultural genocide.”

Indigenous leaders as well as survivors of the schools said that while the Pope’s apology evoked strong emotions and was a highly significant step towards reconciliation, more action needed to be taken by the Church and the government. 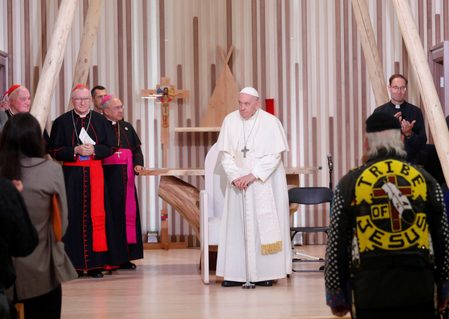 “You can’t just say, ‘I am sorry,’ and walk away. There has to be effort, and there has to be work in more meaningful actions behind words,” said Nakota Sioux Nation Chief Tony Alexis.

On Wednesday, the Pope will travel to Quebec City for the more institutional part of his visit, meeting with government officials and diplomats.

On his way back to Rome on Friday, he will stop for a few hours in Iqaluit in the Canadian Arctic, where indigenous affairs will return to the fore.

The Iqaluit area is one of the fastest-warming parts of North America and there the Pope is expected to address the dangers of climate change. – Rappler.com