MANILA, Philippines – Meta, the company that owns Facebook and Instagram, removed the verified account of Chao Tiao Yumol, the suspect in the Ateneo shooting incident that killed three people.

In an email to Rappler on Thursday, July 28, the tech company confirmed that they had taken down Yumol’s Facebook and Instagram accounts. On Tuesday, July 26, Rappler noticed the blue check next to Yumol’s name on Facebook – indicating a verified status – had also been removed.

The company also said that it will continue to remove posts that support or represent either the shooting incident or the suspect.

Prior to the takedown, Yumol’s Facebook account had over 73,000 followers. An analysis of his posts showed that he used his platform to support former president Rodrigo Duterte’s brand of vigilante justice and to attack members of the opposition. 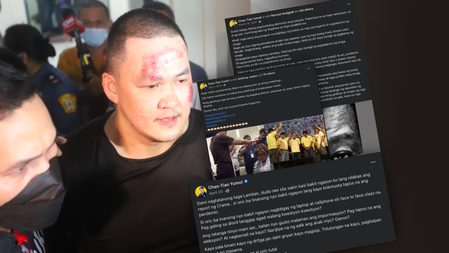 An earlier Rappler investigation found that over half of the posts (56.6%) mentioning Yumol on Facebook from Sunday, July 24, to Tuesday, July 26, support or sympathize with him. These posts by pages, groups, and verified profiles range from humanizing the suspect, justifying his actions, to hailing him as a hero.

Rappler found that a post from pro-Duterte and Marcos blogger Maharlika, which wished Yumol to “stay strong” following his arrest, is no longer available as of Thursday, July 28. The post had at least 21,000 total interactions before it was taken down. In 2020, the tech company acted on a similar incident by banning Kyle Rittenhouse, the 17-year-old gunman who fatally shot two men in Kenosha, Wisconsin in August that year. It also removed posts praising him on the platform. However, the policies were reversed after Rittenhouse was acquitted in November 2021. – with reports from Gaby Baizas/Rappler.com