MANILA, Philippines – President Ferdinand Marcos Jr. on Monday, July 25, addressed Congress in his first State of the Nation Address (SONA), with some points of his 74-minute speech touching on technology-related issues.

Early on, he discussed adjustments to the tax system, which included a mention of the imposition of value-added taxes on digital service providers through a digital economy taxation measure, which the President said will net the government around P11.7 billion in 2023.

The President also included rhetoric on technology as the Fourth Industrial Revolution, stating a list of emerging technologies.

“This will be characterized by the infusion of technology into almost every facet of our daily lives.  Breakthrough technologies in the areas of quantum computing, artificial intelligence, nano technologies, the internet of things, robotics, self-driving electric vehicles, 3D printing, Virtual and Augmented Reality, among others that will radically transform the way business is done,” he said.

He called upon the Department of Information and Communications Technology (DICT) “to identify and utilize these innovations to improve governance,” telling the agency to create secure online access to public services, digitization of government archives, and the “harmonization” of access to data across government departments and agencies under proposed e-government and e-governance bills. 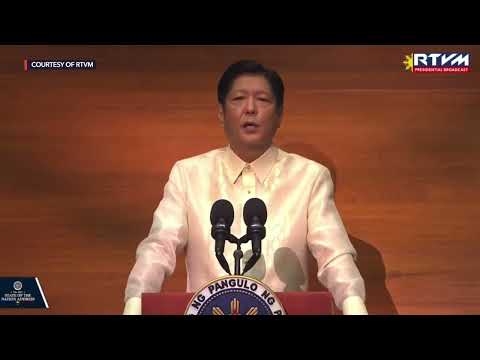 The e-government and e-governance acts are among Marcos Jr.’s 19 priority bills in his SONA.

The E-Governance Act of 2022 “mandates the government to establish an integrated, interconnected, and interoperable information and resource-sharing and communications network spanning the entirety of the national and local government, an internal records management information system, an information database, and digital portals for the delivery of public services.”

The President mentioned that the national ID system would also be an integral part in verifying people’s identity so they may easily transact through e-governance platforms, and targeted issuing 30 million physical IDs and 20 million digital IDs by the end of the year.

The E-Government Act tasks the DICT to create an E-Government Masterplan to facilitate the development of digital services and processes of government agencies, with measures to be revised every 3 years, if the bill is passed into law.

The third priority bill listed by Marcos Jr. that pertains to digital platforms or services is the Internet Transactions Act or E-Commerce Law, which aims to create effective regulation of online commercial activities to protect consumer rights, data privacy, and intellectual property rights. It also seeks to create an e-commerce bureau under the DTI that will oversee online commercial activities that are not currently regulated.

For internet connectivity improvement, the President mentioned the continuation of the National Broadband Plan; the common tower program which allows for tower interusage among different telco companies; and the Public Service Act that removes restrictions on foreign investment that he said will “translate into better quality, availability and affordability of telecommunications services all over the country.”

He also mentioned a “Broad Band ng Masa” project which appears to be a continuation of the government’s free WiFi project albeit with specific “BBM” branding.

Marcos also asked the Department of Migrant Workers and the DICT to make it a top priority to “automate the verification of contracts and issue secure Overseas Employment Certifications (OEC) that you can keep on your smartphone.” – Rappler.com