Among grocery industry giants, Costco is one of the more cost-effective choices. The price of...

The post Costco Just Made These 7 Items More Expensive appeared first on Eat This Not That.

Among grocery industry giants, Costco is one of the more cost-effective choices. The price of a membership is well worth the return when you get access to discounted bulk deals. It can often save a few dollars here and there per shopping trip—which can add up to hundreds over time.

This helps members stay somewhat insulated from the rampant price changes affecting other grocers elsewhere. That is to say, when you go to Costco, you’re likely a savvy shopper expecting to get a good deal.

But due to factors like most recent supply shortages, widespread product recalls, and general inflation, it’s fairly natural that costs are increasing. But it’s an unsettling experience for warehouse customers. Costco notably tries to keep its staple goods at steady prices. Watching costs climb is tough to swallow, but during this period of hampered supply, it may be the harsh reality for the next year or so.

These are seven of the products that Costco has marked up recently. You probably still won’t pass them up because they’re some of the most popular items customers love to buy—but at least you can brace yourself for the sticker shock.

RELATED: This Beloved Snack Is Back at Costco and After Trying It I Have Some Thoughts 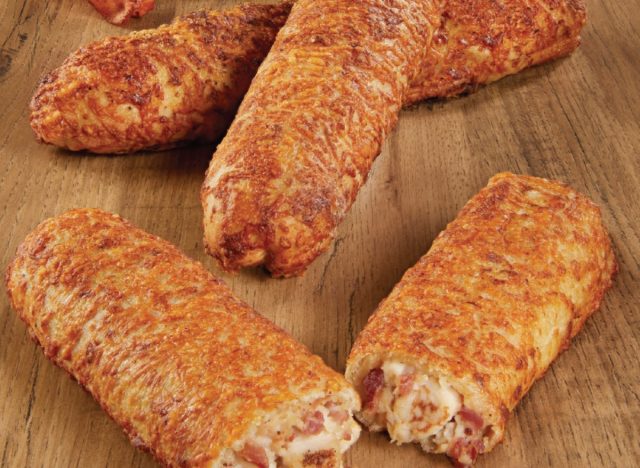 Perhaps the most heartbreaking signs of recent change are in the food court, where the prices are usually anchored for life, like the $1.50 hot dog combo.

Any dedicated customer could tell you that this doughy, cheesy, caesar dressing-filled hot chicken pocket was famously priced at $2.99 for years. But Costco announced a “national update” that would mark the chicken bake up to $3.99 at the beginning of July.

This was unexpected—even for Costco employees. One food service worker told The Los Angeles Times, “I was surprised, ’cause they never do increases on the items. Once they’re out, that’s usually the price they keep.”

For those who consider this their most beloved item on the menu, hiking up the price is better than choosing to discontinue it (RIP, combo pizza).

To get all the latest Costco news delivered right to your email inbox every day, sign up for our newsletter! 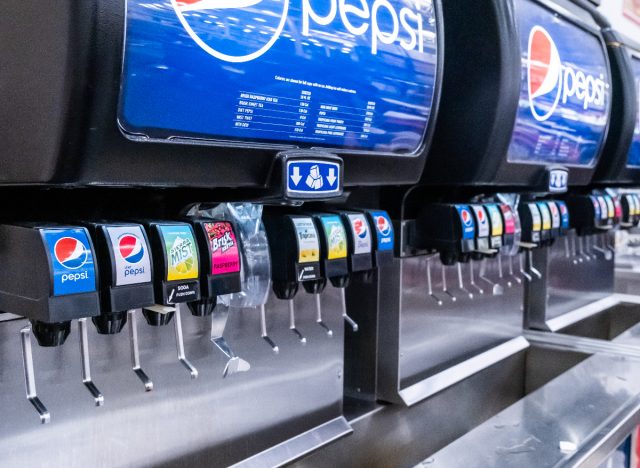 Another victim of the “national update”: fountain drinks. A soda will now cost you a dime more, at $0.69 for a 20-ounce fill-up. It may not seem like much, but that’s a 17% increase. No talk of getting rid of the free refills, though, so you can breathe a sigh of relief on that one. 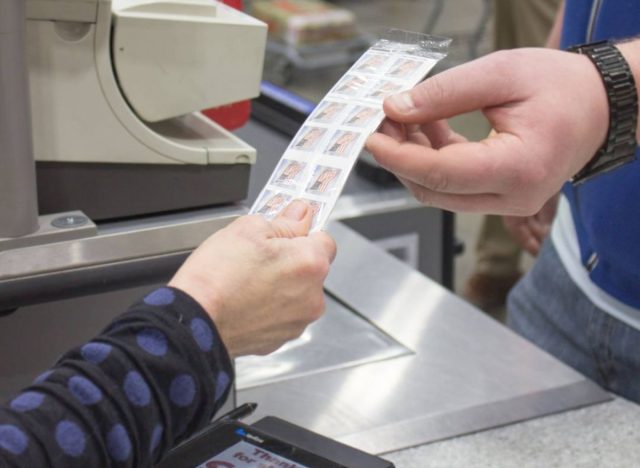 The postage stamps that you can hold onto and use forever—hence the name—just got a price increase from $0.58 to $0.60 per stamp. But you can’t really blame Costco—they’re just adjusting based on the newly issued postage prices instated by the United States Postal Service. Forever Stamps started off at $0.41 when they were first sold in 2007, and they’ve slowly risen in price over time.

While members can still purchase the 100-stamp booklet for the previous rate of $57.75 until August 28, it seems like the online inventory has already been marked as out-of-stock. If there are any left, you may find them in person at your local Costco. 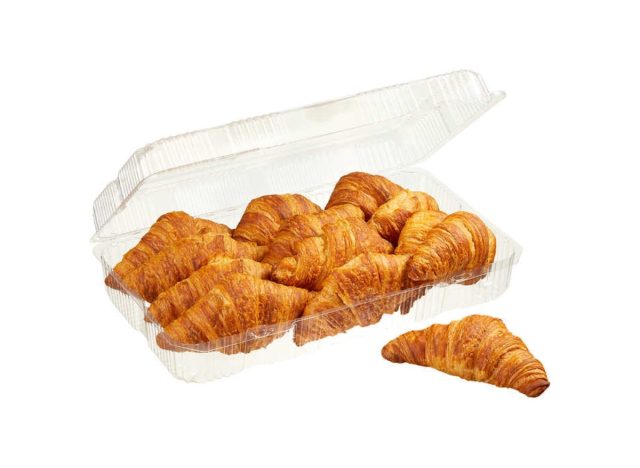 What do all bakery items have in common? Flour, which is made from wheat, a resource that’s facing short supply in the U.S. as exports from Ukraine have been suspended due to the Russian invasion.

For baked goods lovers, this means paying $1 extra for the 12-pack of Kirkland Signature Croissants, a 20% bump from just earlier this year up to $5.99.

While some customers might be upset over the significant hike, others are just glad that the recipe has remained the same. “You BUTTER believe it they went up in price!!!! But seriously, the recipe is key, and I hope they don’t go back to $4.99 and rename them ‘Butter Flavored” Croissants!'” one Reddit user commented.

If you’re still adding this to your cart, keep this one hack in mind to turn these boxed croissants into a luxurious eating experience. 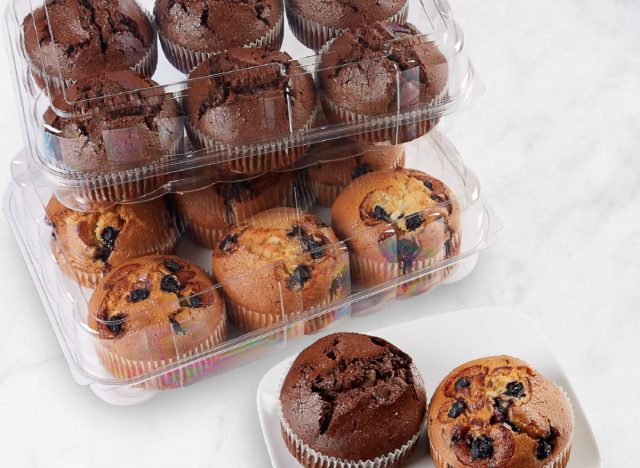 These muffin packs come in so many different flavors that there’s bound to be a favorite for everyone. Maybe that’s why, in addition to the inflated costs of raw materials, the $1 rise in price was also tacked onto this half-dozen box of Kirkland Signature muffins. They’re now $8.99, which Costco’s Senior Vice President, Finance and Investor Relations Bob Nelson revealed on a May 2022 earnings call.

“Reluctantly, we took up the price of our muffins and our croissants, I think, $1 as the price of a lot of those raw materials have continued to escalate to two times and three times and four times what they were last year,” he said about the need to raise prices. 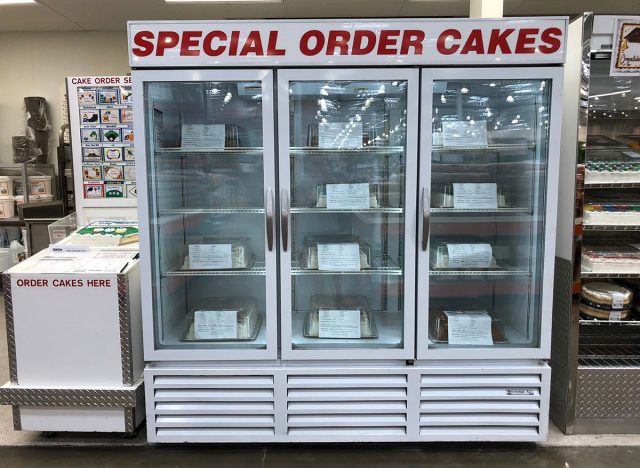 After briefly disappearing during the pandemic, these desserts returned to the bakery—but at what cost? The trusty $19.99 buttercream-iced, party-sized cake is about to get a new sticker price of $24.99, according to a Reddit post from early July.

Will the $5 upcharge turn shoppers away from this crowd pleaser? Unlikely, as some commenters note that the cake is still a great deal. “My regular grocery store charges $40 for a sheet cake that’s inferior to costcos,” said u/kiggitykbomb.

For those who pick up a half-sheet cake and need to be reminded not to polish it off all at once, Costco shoppers say the leftovers freeze especially well. 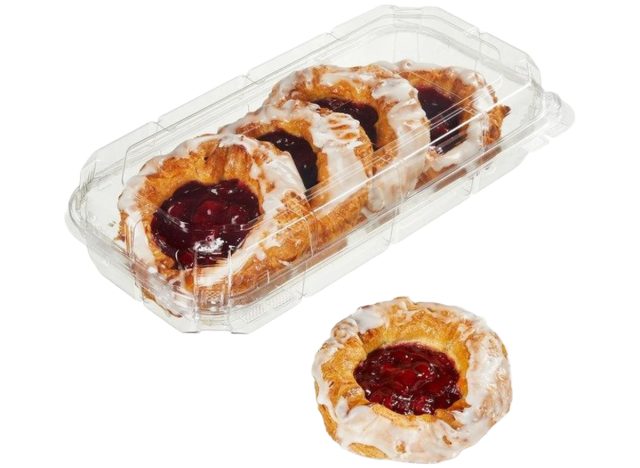 When put to the test, the Danish tops all other pastries in the Costco bakery section. It also comes with one of the highest price tags…and it just climbed up. Normally, you can mix and match two 4-packs for $9.99.

But in June, one Reddit user noticed that the flaky, flavor-filled desserts are now more expensive, at $11.99. Based on the popularity of this pastry, it’s probably still worth it. And a quick tip: if you have less margin for error at this higher price point, customer-appointed favorites are the almond and cheese danishes.

The post Costco Just Made These 7 Items More Expensive appeared first on Eat This Not That.