Coca-Cola may be stepping on Starbucks' toes soon. The iconic soda company has been looking...

The post Coca-Cola Is Launching a Revolutionary New Coffee Machine appeared first on Eat This Not That.

Coca-Cola may be stepping on Starbucks’ toes soon. The iconic soda company has been looking toward innovation to break out of the boundaries and open new doors. And unbeknownst to many Americans, it has already been well on its way.

In 2019, the soda company acquired the UK coffee chain Costa Coffee and has been expanding it throughout Europe since. Most recently, Coca-Cola announced plans to launch those products in the U.S. by the end of the year.

RELATED: This Costco Rival Is Expanding From Coast to Coast

The company will be focusing its efforts on a particular product—coffee vending machines called “Costa Smart Cafes.” The units provide autonomous coffee at “the touch of a button,” completely barista-free. Its website says the Smart Cafes are the world’s first coffee machine of its type and it can produce both hot and cold beverages, with over 500 different types, from “ice coffees to iced fruit cordials.” While it’s not clear where in the U.S. the units will first appear, the vending machines are used in convenience stores and grocery stores, retail outlets, as well as lodging and leisure areas. 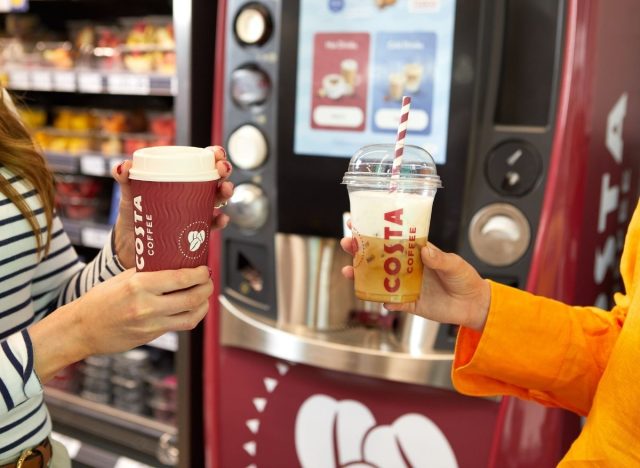 Costa has done particularly well during the pandemic, where its self-service model thrived, according to Beverage Daily.

While Europe is well familiar with Costa since it got its start in 1965, the States is completely new territory. The timing couldn’t be better, however, as coffee consumption in the U.S is at a two-decade high, according to polling released by the National Coffee Association (NCA).

The beverage maker has been busy breaking its own rules recently. Just last month, Coke released its first co-collaboration with a celebrity, a new fruity drink with the EDM artist, Marshmello. Additionally, it has been experimenting with creating mixed cocktails, most recently its Jack Daniel’s & Coca-Cola pre-mixed ready-to-drink (RTD) and Simply Spiked Lemonade.

The post Coca-Cola Is Launching a Revolutionary New Coffee Machine appeared first on Eat This Not That.