Air force spokesman Shen Jinke was quoted by state media as saying at a military airshow that the air force has many types of fighter jets capable of circling “the precious island of our motherland.”

US House of Representatives Speaker Nancy Pelosi, number three in the line of presidential succession, signaled on Friday she was embarking on a trip to Asia. She did not mention Taiwan, but speculation of a visit there has intensified in recent days, fueling tensions beyond the Taiwan Strait.

Chinese President Xi Jinping warned his U.S. counterpart Joe Biden on Thursday that Washington should abide by the one-China principle and “those who play with fire will perish by it.”

Don’t ‘play with fire’ over Taiwan, China’s Xi warns in call with Biden 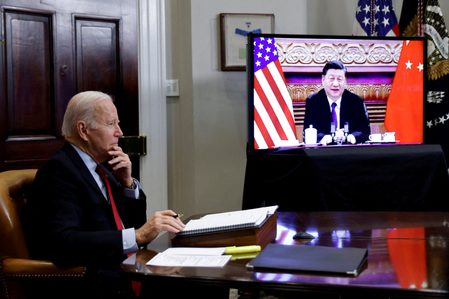 Shen said on Sunday: “The air force has the firm will, full confidence and sufficient capability to defend national sovereignty and territorial integrity.”

No evidence of looming Chinese military action against Taiwan, US official says