Burger King has long been known for one product above all else: the Whopper. So...

The post Burger King Will Not Be Bringing Back This Cheap Burger, CEO Says appeared first on Eat This Not That.

Burger King has long been known for one product above all else: the Whopper. So it makes sense the chain wants to preserve the item’s iconic status as it continues to rethink brand strategy.

It’s the main reason the Whopper has been removed from the dollar menu this year, and why, according to Restaurant Brands CEO José Cil, it will not be coming back with the same price tag in the near future.

RELATED: The #1 Order to Never Make at a Steakhouse, According to Chefs

“The Whopper is our flagship and it’s our core product that’s been around since 1957,” Cil said in an interview with Yahoo Finance. “We’re moving it out of core discount and elevating it to its proper status. This is a key part of our plan for the BK U.S. business.”

When asked whether the Whopper it will make a comeback on the value menu, Cil’s answer was a resounding “no.”

Instead, customers will have other value offers to choose from. “We have a $5 Have It Your Way meal, which features a Whopper Jr. We think that’s an amazing value and have seen a good response from our guests,” the CEO added. 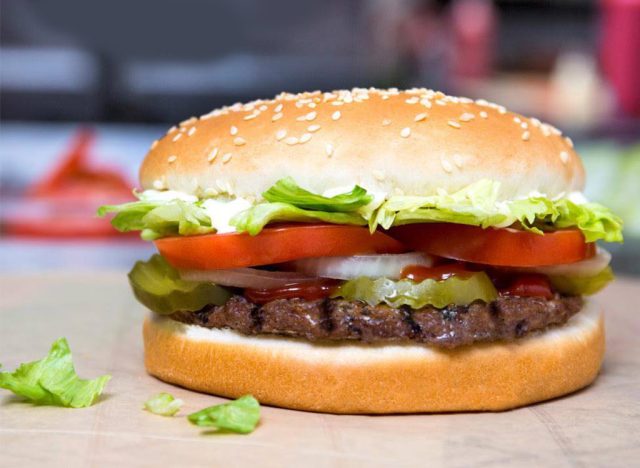 In February, Burger King’s parent company announced several major changes to the chain’s menu. One of them was the Whopper being removed from the Two for $5 promotion. The goal at the time was to reduce the volume of promotions overall. Paper coupons were also on the chopping block, and the company is currently still working on phasing out.

As part of the plan to reinvigorate the Whopper’s image, Burger King has also released a new lineup of Impossible King Whoppers and Impossible Southwest Bacon Whoppers, which became available nationwide on June 27. The burger giant has been offering plant-based meat products since the successful launch of the Impossible Whopper in 2019, when it saw some of its strongest sales in years.

The post Burger King Will Not Be Bringing Back This Cheap Burger, CEO Says appeared first on Eat This Not That.