'I look forward to reinforcing the strong US-Philippine relationship and our shared commitments to democracy, human rights, the rule of law, security, and prosperity,' US Secretary of State Antony Blinken says on the eve of his meeting with Philippine officials

MANILA, Philippines – US Secretary of State Antony Blinken is expected to spotlight Washington’s commitment to its Mutual Defense Treaty (MDT) with the Philippines, and raise the protection of human rights and press freedom during his first official visit to the country on Saturday, August 6.

“I look forward to reinforcing the strong US-Philippine relationship and our shared commitments to democracy, human rights, the rule of law, security, and prosperity,” Blinken said in a tweet shortly after his arrival in the country.

Blinken’s visit, which will include a meeting with President Ferdinand Marcos Jr., marks the first time America’s top diplomat visits the Philippines, the oldest US ally in the region, in over three years. The last was Mike Pompeo in March 2019.

“We believe that early and frequent engagement will position us to advance our shared interests and values,” a senior state department official said.

Before Blinken, other senior US officials who visited the Philippines include Deputy Secretary of State Wendy Sherman in early June, and Second Gentleman Douglas Emhoff, who led the US delegation to the President’s inauguration last June 30.

Blinken’s stop in the Philippine capital follows a series of meetings held in Phnom Penh, Cambodia, where foreign ministers around the region met for the 55th Association of Southeast Asian Nations Ministers’ Meeting (ASEAN). The gathering of leaders in the regional bloc was largely overshadowed by escalating tensions between Washington and Beijing over Taiwan – an island that shares a sea border with the Philippines off the northernmost part of Luzon.

China is currently holding live-fire exercises in seven areas surrounding Taiwan, with some drills expected to take place in areas the self-governing island considered part of its territorial waters. The show of force comes after US Speaker Nancy Pelosi visited the island, a move that enraged Beijing.

China’s actions around Taiwan have been viewed as escalatory and without recent precedent, but in other areas in the region, including the South China Sea, Beijing has increasingly challenged the limits of what is considered acceptable military behavior.

It is against this backdrop that Blinken is expected to renew the US’ commitment to its 1951 MDT with the Philippines, a defense pact that sees the two countries commit to defend one another in case of an attack, including in the South China Sea.

“Secretary Blinken will reinforce and underscore to our Philippine allies that our commitment to our Mutual Defense Treaty is ironclad,” the state department official said.

While in Manila, talks between Blinken and Marcos will likewise see the US official raise human rights and press freedom in the country both “generally as well as specific cases.”

Human rights watchdogs have flagged the persecution of activists, the continued detention of former opposition senator Leila de Lima, and thousands of deaths under the Duterte government’s drug war – majority of which remain unresolved.

Under the Duterte administration, the House of Representatives also rejected the franchise renewal of the biggest broadcast network, ABS-CBN, while the Securities and Exchange Commission revoked Rappler’s license to operate, which Rappler has appealed. 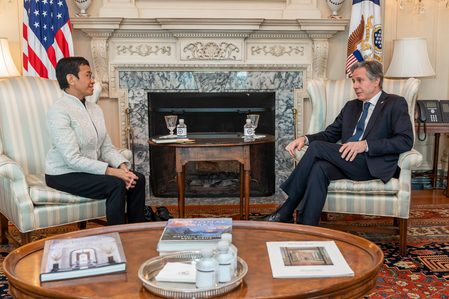 Aside from these, the Department of Foreign Affairs earlier said bilateral discussions will also include ways to broaden economic ties and grow cooperation on tackling climate change – two areas Marcos has identified as key priorities under his administration.

“Trade, not aid,” Marcos had said in a meeting with senior officials of the US embassy in May, shortly after winning the presidency.  – Rappler.com