The biggest fast-food pizza company in the country (and world) has a lot of orders...

The post America's Largest Pizza Chain Is Facing This Major Shortage Right Now appeared first on Eat This Not That.

The biggest fast-food pizza company in the country (and world) has a lot of orders to fill. Domino’s drivers travel about 10 million miles across the country every week to deliver all the pizza America could possibly need.

Unfortunately, the chain’s ongoing problem has been that it doesn’t have enough manpower to deliver all those pizzas. And it has caused major pains for the company whose business model depends on it.

During an earnings call last Thursday, Domino’s reported mixed results, with same-store sales falling in the U.S. by almost 3%. Many of its restaurants have had to shorten their hours due to driver scarcity, which has impacted earnings company-wide.

RELATED: America’s Biggest Chicken Chain Is Adding This to the Menu for the First Time in Decades

In fact, the shortage has gotten so bad, that roughly 40% of Domino’s restaurants in the United States are now using call centers to take orders so employees can focus on making and delivering pizzas. 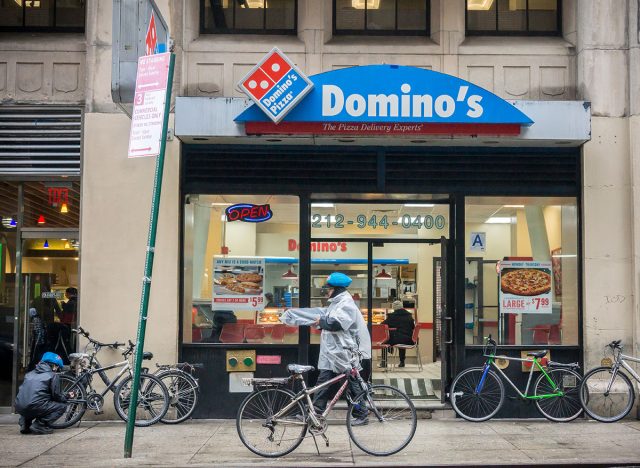 The company, however, said it still believes it can fix its staffing shortages internally, suggesting it is still hesitant to onboard third-party delivery parters like DoorDash and Uber Eats.

“We continue to believe that many of the answers to the labor shortages we are facing are already in our system,” said CEO Russell Wiener, adding that “the question remains, can we close the gap in performance and get back to fully meeting demand utilizing our current delivery model.”

The driver shortage has been an ongoing issue and something that Domino’s has been looking to address. It has seen same-store sales slipping because of staffing shortages since last April—which was a far cry from its success during the pandemic’s lockdown period when its success hit highest levels in a decade.

After Domino’s first quarterly slump this year, the pizza giant stated it would rethink its stance on using third-party delivery services, something its rivals Papa John’s and Pizza Hut have invested in. The shift was a surprising one as two years prior to that, the company’s CEO stated he’d have a “tough time sleeping at night” if Domino’s ever came to relying on third-party delivery, according to QSR Magazine.

But even back in February, Domino’s was looking for fixes to its staffing problems—anything that didn’t include a third party partner. During that time, it had begun a promotional deal offering to pay its patrons to order carryout instead of delivery.

Domino’s isn’t the only pizza company experiencing driver shortages. Pizza Hut has reported similar issues as did Papa Johns, although using third-party delivery services has certainly alleviated some of the pressure.

For his part, Weiner is confident Domino’s can regain its footing despite its current challenges.

“The strength of our franchisees and team members, along with the strategies we are putting into place, make me confident we are on a path to overcome these short-term obstacles and make the Domino’s brand and business stronger than ever,” he said on the call.

The post America's Largest Pizza Chain Is Facing This Major Shortage Right Now appeared first on Eat This Not That.