Look, potato chips are delicious. They are "rich," so to speak, in fat and salt—two...

The post 9 Secrets About Lay's Chips You Never Knew appeared first on Eat This Not That.

Look, potato chips are delicious. They are “rich,” so to speak, in fat and salt—two nutrients that the human body evolved to crave. However, this also means that you should probably relegate potato chips to a rare snack instead of having them as part of your daily diet.

Still, there’s no denying that Americans love a good potato chip, especially from one of the most iconic brands: Lay’s. What started as H.W. Lay selling chips from the back of his Model A car in the 1930s has evolved into a behemoth chip brand today.

Here’s everything you probably never knew about Lay’s potato chips, and next, don’t miss Costco’s Most Popular Items Right Now.

The brand is owned by a department of PepsiCo. 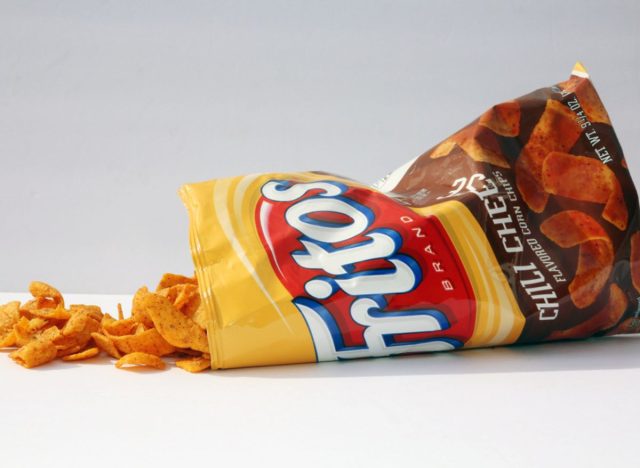 Lay’s sources its potatoes from all over. 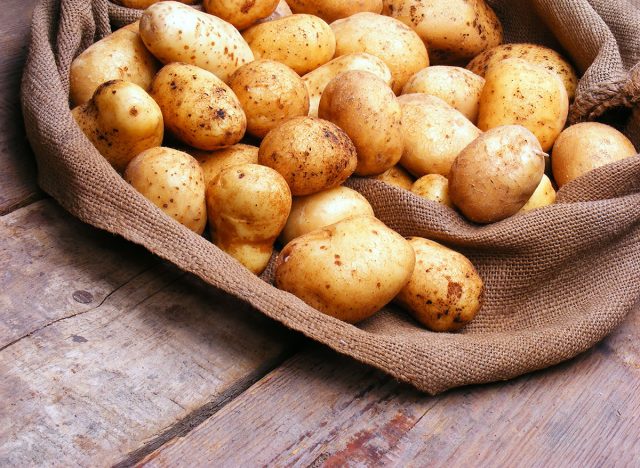 According to ABC News, Lay’s sources the potatoes used to make its chips from 25 different states, with Michigan and Wisconsin being its largest suppliers in 2018.

But the potatoes are a special strain. 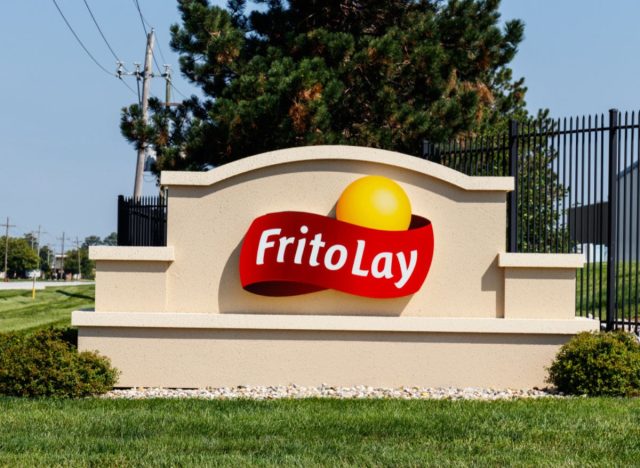 Lay’s potato chips are produced using a proprietary strain of potatoes–so proprietary, it turns out, that the global snack food behemoth got into it with a number of small-scale farmers in India who were allegedly growing “their” spuds, reports CNN. Lay’s sued the farmers in 2019 to force them to cease production, and later, offered to settle the matter if the farmers would grow for Lay’s… or grow different potatoes.

RELATED: We Tasted 6 Potato Chip Brands and This Is the Best

Lay’s chips are high in sodium. 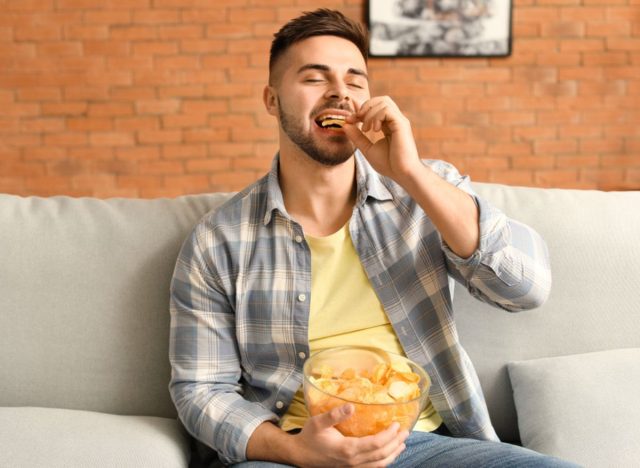 You know potato chips are salty, that’s hardly a revelation. Still, just how salty they are may come as a shock.

According to the labeling of a single eight-ounce bag of Lay’s Classic potato chips, that bag will net you 1,360 milligrams of sodium, which is way more than half of your daily allotment of 2,300 milligrams, per the CDC. 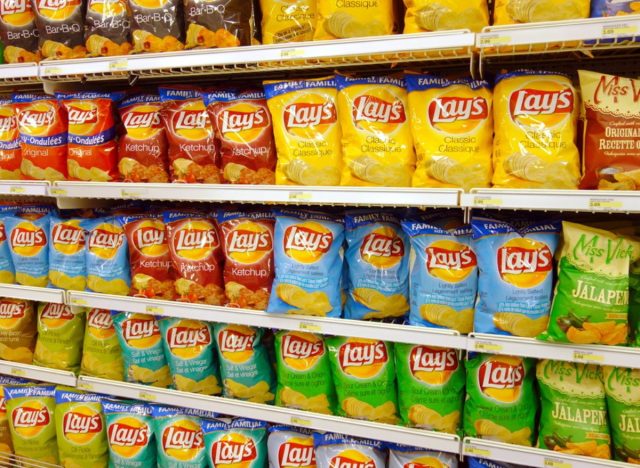 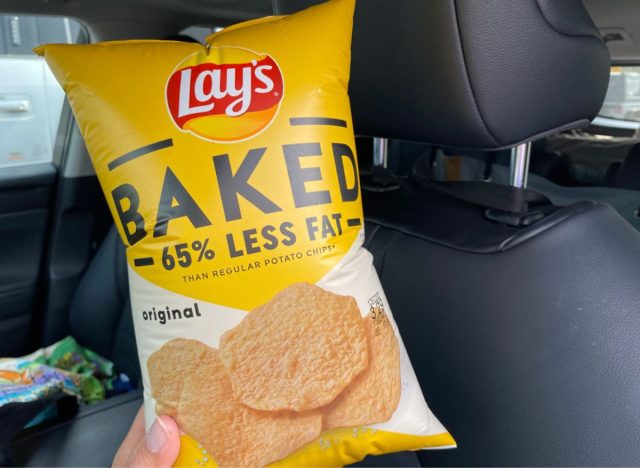 Sure, Baked Lay’s are “healthier” than standard deep-fried Lay’s potato chips, but know that a single 100-calorie bag of Baked Lay’s (and that’s a very small portion, FYI) has three grams of fat and 140 milligrams of sodium.

RELATED: What Happens to Your Body When You Eat Potato Chips 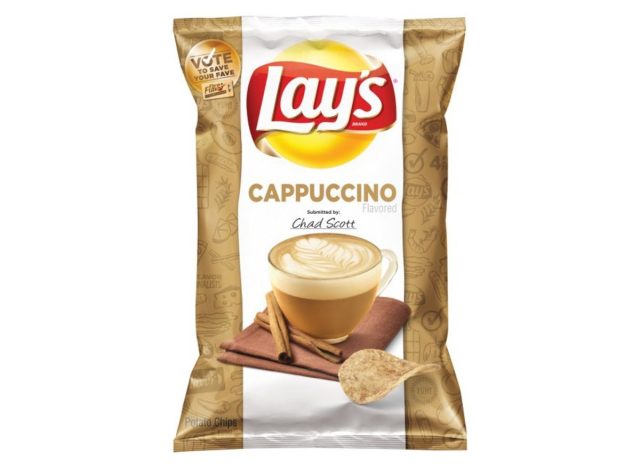 Lay’s once produced and sold Cappuccino-flavored potato chips. The limited run was part of a contest wherein Lay’s fans could submit flavor ideas and then vote on their absolute favorite, according to Grub Street. Cappuccino won, and the chip giant had to follow through with making them. 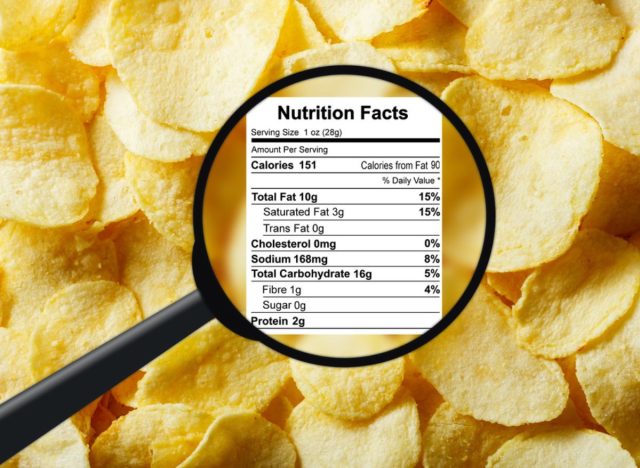 Take a closer look at the nutrition information label on a bag of Lay’s potato chips.

The classic, single-serve-sized bag, for instance, contains eight ounces of chips, yet if you look at the servings listed per container, it’s eight. So sure, 160 calories and 10 grams of fat may seem OK, but if you eat the whole bag, you’ll need to times that by eight.

RELATED: The Most Popular Chips You’ve Got to Try at Least Once

There’s a science to “Bet you can’t eat just one.” 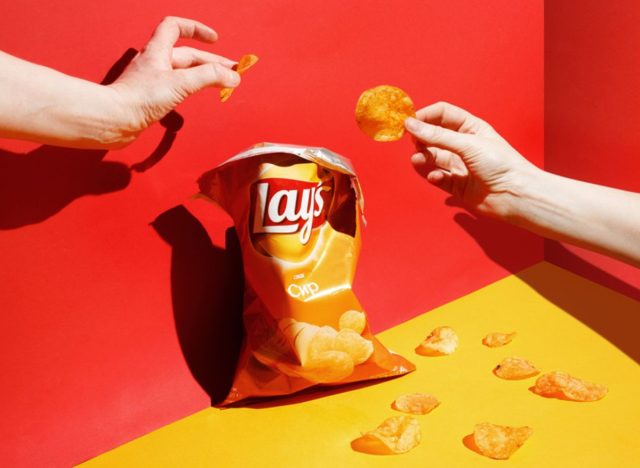 Lay’s came up with a clever slogan with “bet you can’t eat just one,” but it turns out that they weren’t just being cute.

According to Men’s Health, the very crunchiness of a Lay’s potato chip, a “virtue” the brand does its best to promote, leads to a physiological association with positivity and enjoyment, which makes us yearn for more crunch. That’s why it’s so hard to eat just one potato chip.

The post 9 Secrets About Lay's Chips You Never Knew appeared first on Eat This Not That.