We all know and love Costco for its great deals on bulk items you can't...

We all know and love Costco for its great deals on bulk items you can’t find anywhere else. We also love the friendly employees who welcome customers into the store, help answer questions, and hand out free samples every time we visit. But it turns out there’s a lot more to working a job at Costco than we ever really get to see behind the red and white uniforms.

Pretty much all workplaces have employee handbooks and specific rules that are directly associated with the flow of the business. However, some current and former Costco employees have exposed certain rules that they believe to be controversial. We did a deep dive and found that there are some rules and requirements that may seem questionable on the surface, but they make more sense once you consider the rationale behind them. Then there are others that might be taking it too far. Keep reading for seven surprising rules Costco requires its employees to follow.

There’s a strength and age requirement. 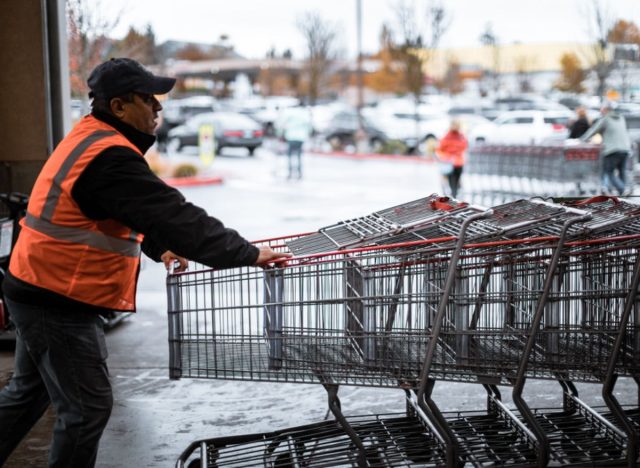 Costco prides itself on inclusivity and diversity, but there are certain dangers that come with the job, so there are two exceptions to this commitment. According to Indeed, you need to be at least 18 years of age to work in most positions. Costco claims that this is because many of the operations and manufacturing jobs—such as working in the tire shop or as a product stocker—require the use of heavy machinery that can be hazardous. In addition to being old enough to ride, Costco requires that its employees be able to lift over 30 pounds as a part of the job. The pillars and pillars of products you find in every aisle don’t stack themselves!

Employees that man the front doors have to keep track of how many people are entering the store. 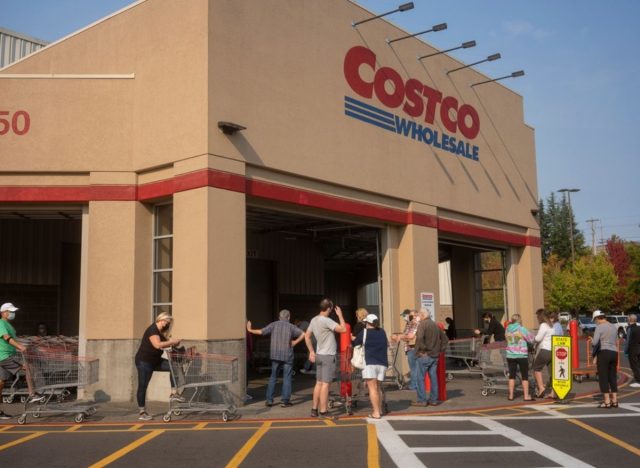 When you walk into Costco you’re usually asked to flash your membership card before you’re welcomed inside. The employees at the front door don’t just authorize you to enter, they are also required to keep a tally of how many people are coming into the store. Costco workers told Mental Floss that this tedious process is intended to contain checkout lines to the greatest extent possible—the more people coming in, the more cash registers they’ll open. 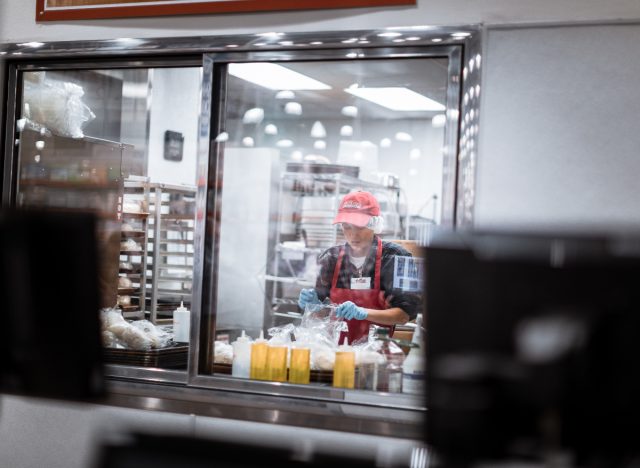 Anyone who works with food knows that there are many rules to maintain sanitation standards and protect the well-being of customers. When you work with food at Costco—either in the food court or making the delicious pre-made meals in the back prepared food section—you have to abide by all of them.

For starters, anytime someone leaves their assigned area wearing an apron, the apron must then be thrown in a hamper in exchange for a clean one, regardless of whether it got dirty, out of concern for contamination. Seems a little extreme, but it’s also hard to argue with policies that are clearly precautionary.

Some Costco employees (especially those working in the food court) have also complained about what they believe are unnecessary rules that result in excessive food waste. While workers use tongs to serve up slices of pizza, there are many instances in which customers change their minds before paying, and the unwanted food ends up in the trash. No matter if anyone ever physically touched the pizza, once that slice hits the register counter it can’t be put back on the rack.

All floor employees have power over membership cards. 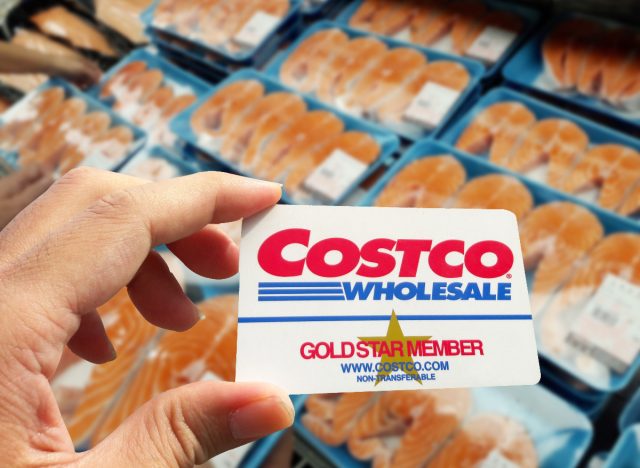 Memberships at Costco are annual, but almost any Costco employee has the power to revoke your membership status. If a customer incites an altercation or is caught stealing inside the store, it’s on the employees to terminate the customers’ membership. It will usually be immediate action if it’s a serious situation, but for lesser infractions, all workers have the ability to leave notes on the member’s account for future reference in a sticky situation.

The employees are forced to constantly throw out food. 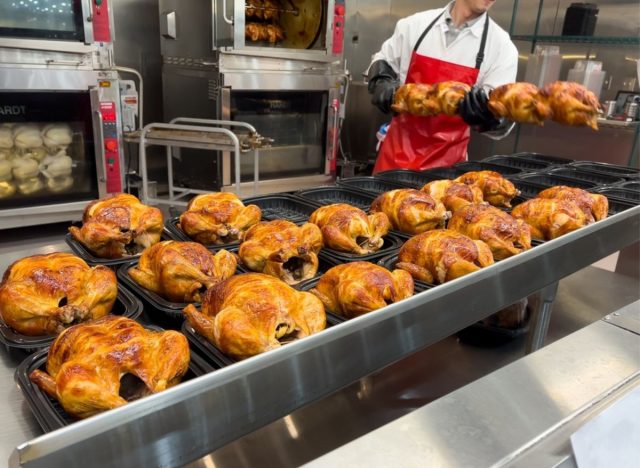 It’s not just the food court that has rules about when food must be discarded. The legendary Costco rotisserie chickens are only allowed to sit out for two hours max. If they are not purchased in that time then they end up in the trash, according to Business Insider. Again, we understand why this rule exists even though it seems wasteful. But the good news is that at some locations, employees try to repurpose the rotisserie chickens before tossing them, using the extras to make pre-packaged chicken noodle soup for the day.

All food workers must have spotless fingers. 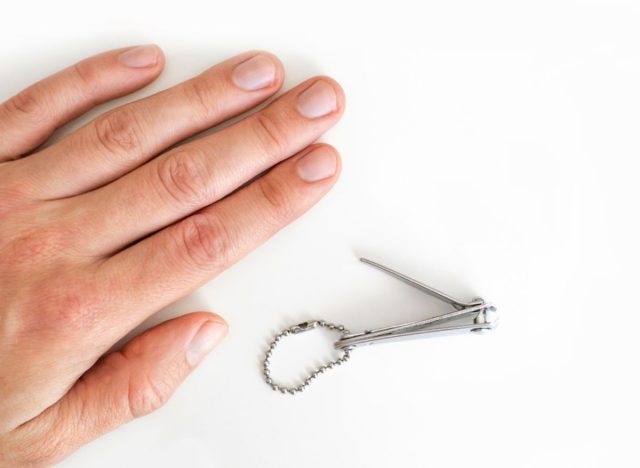 Having hand-washing rules or an expectation that workers will wear gloves when they handle food is not unusual. But per the employee handbook, Costco requires that employees’ hands must be free of everything—no nail polish or acrylic nails and no jewelry, with clean, trimmed fingernails. Some employees feel the rule goes a little too far, but on the other hand (no pun intended), a whole acrylic fingernail falling into a pan of pre-made Costco mac and cheese doesn’t sound great, either.

RELATED: The 10 Worst Foods To Buy at Costco, According to Dietitians

Product constantly has to be moved around. 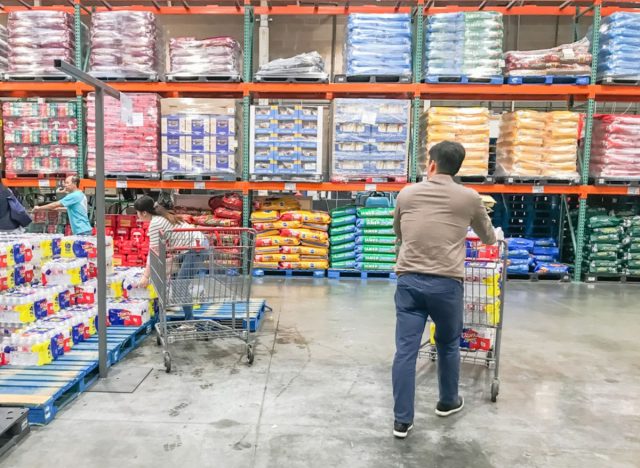 Think you know where the razors are because you just bought them at the same location last month? Think again. Costco employees are asked to move products around to create somewhat of a “treasure hunt” effect, requiring customers to walk and shop all over the store to find what they’re looking for. According to Reader’s Digest, by preventing you from making a beeline to whatever aisle you’re looking for, Costco hopes you’ll wind up walking past other things and add them to your cart.

August 17, 2022
Over 13,000 Pounds of This Popular Frozen Pizza Is Being Recalled Because of a Serious Contamination

Over 13,000 Pounds of This Popular Frozen Pizza Is Being Recalled Because of a Serious Contamination