While fast-food is certainly not something you should eat every day (even if said fast-food purports...

The post 6 Unhealthiest New Fast-Food Items To Say Away From Right Now appeared first on Eat This Not That.

While fast-food is certainly not something you should eat every day (even if said fast-food purports to be healthy, or trick you into thinking plant-based is nutritional), a nugget fix now and again certainly isn’t the end of the world—unless the sodium count in said nuggets is staggering.

Always on the cusp of innovation and invention, fast-food restaurants are constantly releasing new and exciting menu items and limited-time specials. As tempting as fried pickles or mac & cheese may sound, it’s important to pull back the curtain a bit (or in this case, pull back the breading and the bun) to see what ingredients are really lurking underneath and whether or not the nutritional demerits are worth the splurge.

RELATED: 9 Ice Cream Brands That Use the Lowest Quality Ingredients

Over the past few months, there’s been a deluge of dazzling new fast-food menu items and seasonal specials, from the hotly anticipated Strawberry Frosty to new meat-free burgers. But behind the buzz words is the fact that many of these newbies are…less than healthy.

To get to the bottom of this new crop of fast-food novelties we consulted registered dietitian Amy Goodson about which of the new items are worth ordering or avoiding—and some healthier alternatives if the cravings still linger. 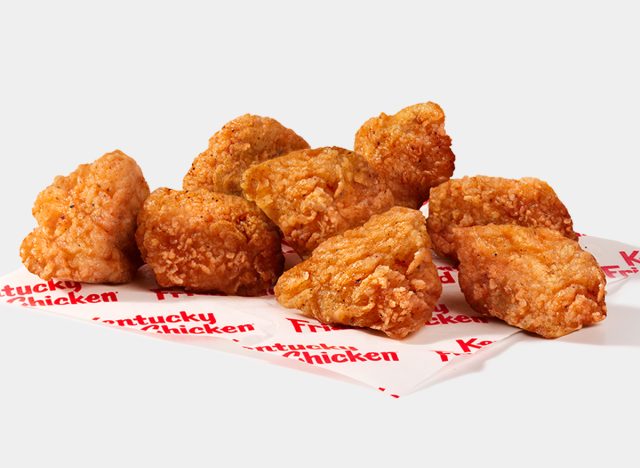 It’s always exciting when a restaurant chain revives an old classic (ahem, Taco Bell’s Mexican Pizza), which is why there was such hoopla over the long-awaited return of KFC’s Kentucky Fried Chicken Nuggets.

Back this summer for the first time in decades, the crispy snacks are available in 8, 12, and 36 pieces, with a side of dipping sauce. The one big caveat, for now, is that they’re currently only available in one test market: Charlotte, N.C. But considering how not-so-great these low-key sodium bombs are, that might actually be good news for you. Sorry, Charlotte.

“While 45 calories and 3 grams of fat may not seem a like a lot, when you start multiplying that by 8 and 12, it can add up pretty fast,” says Goodson. “The 8-count nugget order contains 360 calories, 24 grams of fat, and 1,080 mg sodium. The 12-count nugget starts really inching up there with 540 calories, 36 grams of fat, and a whopping 1,620 milligrams sodium, which is half of the daily allowance. And remember, this is without side items!”

To keep things healthy-ish, Goodson emphasizes the importance of portion control. “Stick with the 8-piece nugget and pair it with some more nutritious sides such as corn on the cob, green beans, or mashed potatoes. Pairing fried nuggets with fresh veggies will help keep sodium and fat content lower for the meal.” 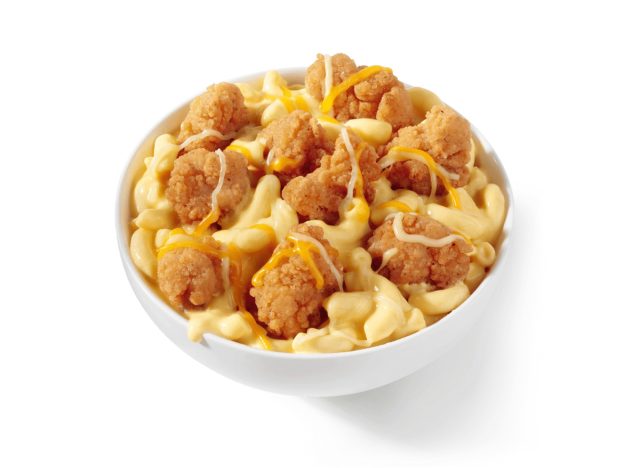 Apparently, KFC is feeling nostalgic this summer, because the brand also brought back another menu item that’s been dormant since 2019. A standout side dish, Mac & Cheese quickly became a popular entree topped with crispy popcorn chicken. And once again, it isn’t the best choice for a healthy diet.

Unlike the side dish portion of mac & cheese at KFC, these bowls are a calorie bomb. “While a side of mac and cheese might fit in nicely with a meal at 140 calories and 6 grams of fat, the Mac & Cheese Bowl might take you over your calorie, fat, and sodium count for a meal,” Goodson explains. “With up to 790 calories, 36 grams of fat, and 2,270 milligrams of sodium, this is way more than most individuals need in a sitting.”

If you’d still like to scratch that cheesy itch, Goodson recommends sticking with the smaller portion that doesn’t come topped with popcorn chicken. “Instead of indulging in the entire bowl, order a side of macaroni and cheese. Pair it with a grilled chicken breast, green beans, and corn on the cob for added protein and fiber. This meal would have significantly less total fat, sodium, and calories than the full Mac and Cheese Bowl.” 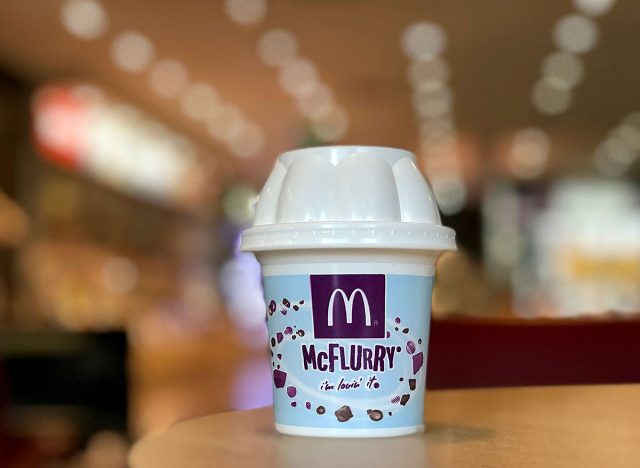 America loves a McFlurry moment. Any time McDonald’s releases a new ice cream treat, it turns into a McFrenzy. Which is why there was buzz over a new, candy-filled McFlurry flavor being tested in Southern California. Made with vanilla soft-serve and strewn with Hershey’s candy bits, it’s basically like an amped-up version of the M&M McFlurry. But more candy also means less healthy.

“Everyone should enjoy dessert every now and again, but with 640 calories and 21 grams of fat, the Hershey’s Mix McFlurry might be a bit much,” says Goodson. “Especially if you also ate a McDonald’s meal on this drive-thru trip.” 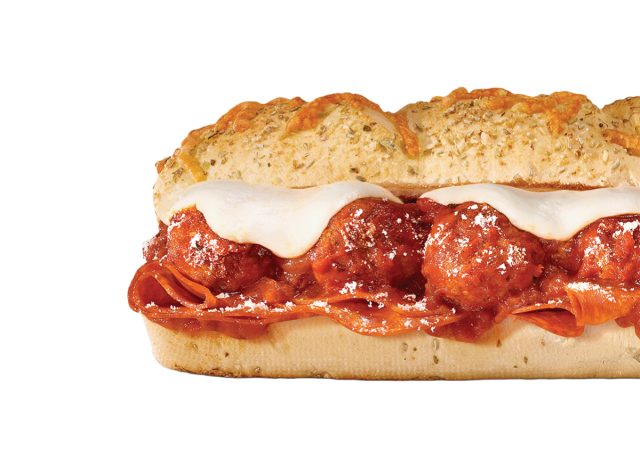 After a maelstrom of drama, lawsuits, and declining sales, Subway was in desperate need of a refresh. And that’s literally exactly what it did with a complete menu overhaul as part of its Eat Fresh Refresh campaign. This summer, the chain got rid of customization on its famously customizable menu (bold move), and instead started selling 12 sandwiches to be ordered as-is. But just because things are “refreshed” doesn’t automatically mean they’re the beacon of health, especially since some of said sandwiches are cheesesteaks and meat bombs.

Considering the wide array of new sandwiches, from “The Boss” (meatball marinara) to “The Monster” (a meaty monstrosity with steak, bacon, and Monterey cheddar), each one has wildly different nutritional facts, fat, calories, and sodium counts. “When it comes to subs, what you put between the bread can make or break the nutrition value,” says Goodson. “While Subway offers lots of subs, here are some key moves to keeping the calories and fat down.”

For starters, she suggests going with a 6-inch sub instead of a footlong. “Choose whole-grain bread or a wrap for more nutrients. Remember more bread and those with cheese have more calories. If you really want to cut back on the calories, try a wrap.”

For meat, Goodson suggests choosing lean meats like turkey, chicken, ham, and even roast beef. “Other meats like meatballs, pastrami, salami, pepperoni and more are typically higher in fat, calories, and sodium.”

And when it comes to condiments, restraint is the name of the game. “Sauces and spreads like ranch, mayo, and other creamy dressings pile on the calories. To lean out your sub, try Subway’s new mashed avocado spread or mustard. If you love the creamy option, get it on the side and use less.” 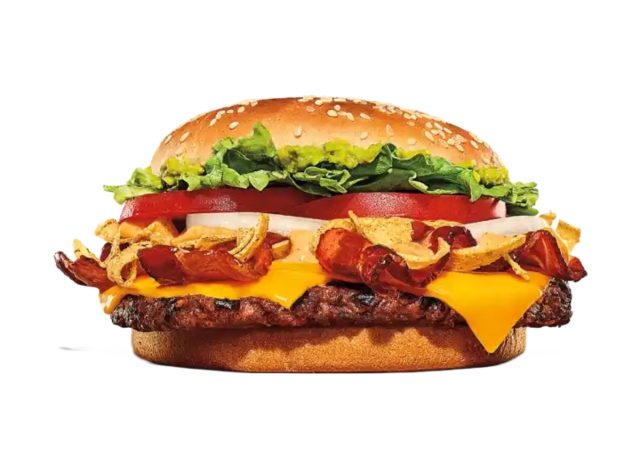 Burger King rolled out two new plant-based sandwiches this summer: the Impossible King and the Impossible Southwest Bacon Whopper. But don’t be fooled by the meat-free patty: just because something doesn’t have meat doesn’t make it automatically healthy.

Goodson also suggests omitting the mayonnaise to decrease total fat and calories. “Another way to cut back on the calories is to go bun-less and wrap the patty in lettuce.” 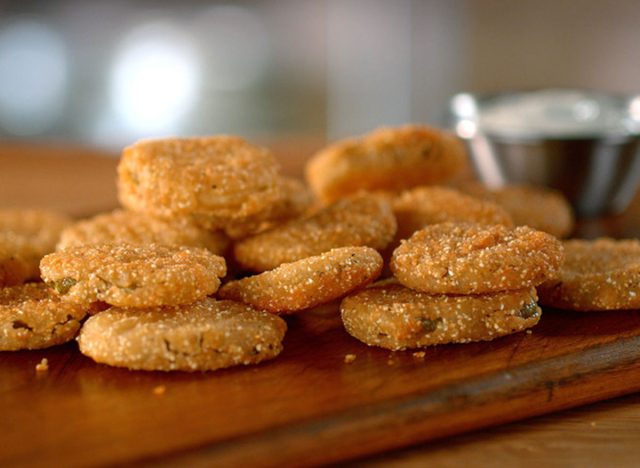 Chicken fingers aren’t the only things getting deep-fried at Zaxby’s. The Southern chain, best known for its crispy chicken, crinkle-cut fries, and signature sauce, decided that there simply wasn’t enough fried food on its menu, and opted to not only bring back the limited-time Fried Pickles, but to make them a permanent menu fixture.

Made with dill pickle slices coated in cornmeal batter, deep-fried, and served with buttermilk and herb ranch sauce, they’re the pinnacle of Southern comfort—and they’re also pretty horrible for you.

“If you want to try this favorite menu item, consider sharing the plate with a larger group and be mindful about the portion size,” says Goodson. “A few bites can satisfy your craving without blowing your caloric bank.”

Another shareable option she recommends is the Zaxby’s Crinkle Fries. “A large order is 530 calories, 23 grams fat, and 930 mg of sodium, which has significantly less calories, fat, and sodium than the pickles, and is still a great shareable snack. Split this between three people and you have a side item that is tasty, but in a better-for-you calorie range. And if you are going to have fries, try pairing it with a salad with chicken. It’s another way to balance your plate and enjoy your favorites!”

The post 6 Unhealthiest New Fast-Food Items To Say Away From Right Now appeared first on Eat This Not That.